UCC’s ‘bystander intervention’ is being made available to all 22,000 students 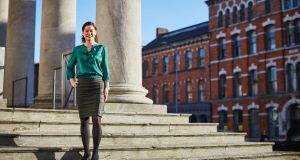 Louise Crowley, a senior lecturer in law, says UCC’s bystander initiative is helping to create a safer campus. “We are seeking to shatter the false consensus over the normality or acceptance of inappropriate behaviour.” Photograph: UCC

One of the most ambitious attempts to create a “zero tolerance” approach to sexual harassment in Irish third level is unfolding on the campus of University College Cork (UCC).

A few years ago, it began piloting a compulsory series of workshops on “bystander intervention” during the first year of its law, nursing and applied psychology classes.

Students were required to attend at least three of the six hour-long workshops to pass their exams.

Louise Crowley, a senior lecturer in law who leads the initiative, says the vast majority of students attended at least five of the classes.

“It’s about creating a cultural shift so we have zero tolerance for any form of inappropriate conduct, ranging from verbal abuse or groping in a nightclub, right up to sexual assault and rape,” she says.

At the core of the programme, she says, is the message that everyone has a responsibility in changing this culture.

The bystander effect is based on the fact that people are often less likely to help a victim if there are others present, for a range of reasons such as fear of being judged.

Crowley says if you can eliminate the fear that you are the only one who will speak up, students feel very empowered.

“We are seeking to shatter the false consensus over the normality or acceptance of inappropriate behaviour,” she says.

The response from students has been overwhelmingly positive, she says.

“Our feedback was the students felt more confident in intervening and felt equipped to make a difference... one male student said: ‘I can’t think of any reason why it shouldn’t be compulsory.’”

The programme is to be made available to all 22,000 students at UCC from next September on a new online platform.

It will be pushed during student orientation, while the heads of schools have been encouraged to get students across all disciplines to sign up.

While students can – on a voluntary basis – complete the equivalent of five workshops online, the sixth will be in-person with a group.

“I’d prefer to deliver it all in-person, but in reality it wasn’t practical,” says Crowley.”

“The idea is that it will empower and upskill students to safely intervene and demand a safer campus and society with a zero tolerance of sexual harassment, in all its forms.”