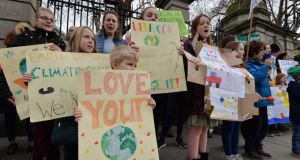 During a talk on climate change a few years ago, secondary school pupil Conal O’Boyle heard something which jolts him still.

“We were told that kids at that time who were three years old were going to be the last generation who can make an international change before it’s too late,” says Conal (16) from Muff, Co Donegal.

“And that hit home with me because my brother was three years old at the time.”

It’s one reason why the student at Crana College in Buncrana has organised a school strike outside the Donegal County Council offices in Lifford on March 15th, demanding that the Government take action to tackle climate change.

The day-long protest forms part of a rapidly growing movement aiming for a global walkout of children next Friday, with thousands of Irish schoolchildren set to take part.

Adults always tell you to own your mistakes, but they’re not actually owning their own

It is a phenomenon that began with a single child, a Stockholm teenager by the name of Greta Thunberg, who skipped class one Friday last August to sit in protest on the steps of the Swedish parliament.

What’s striking is that a young generation, so easily caricatured as disconnected and self-absorbed, too busy Instagramming pictures of themselves, are instead taking a moral lead from the adults.

The protest is no flash in the pan. There has been a build-up of weekly protests in Dublin, Cork and Maynooth since late December; part of a movement known as #FridaysForFuture.

In line with the Fridays for Future mission, Conal and those joining him will be demanding for a national declaration of a climate emergency and for national net zero carbon emissions by 2030.

“It’s incredible to think that there are just 11 years left before this thing is irreversible and beyond human intervention,” says O’Boyle.

“These 11 years will pass us in the blink of an eye, and we need to do something with this short time we have left.”

Ireland’s record on reaching climate targets has, by any measure, been dismal. According to the Environmental Protection Agency, we are drastically off-course to meet our 2020 and 2030 climate targets.

For the second consecutive year, Ireland has also been named the worst climate change performer in Europe in the 2019 Climate Change Performance Index.

Young people see the urgency of changing these patterns with a striking clarity that is absent among most policy-makers.

“It’s verifiable. It’s objective. There’s no controversy around it. They know it’s caused by human activities, but how they experience it is a profound breach of trust between adults and their generation.”

Green Party leader Eamon Ryan finds that the scale of action students are calling for is fitting to the task at hand.

“At Fridays for Future protests, I hear them chanting, ‘another world is possible.’ It’s not just we want this many windmills; they want a complete change. It’s that big vision,” Deputy Ryan said, finding,

“Something’s happened in the last year. The tide on public interest in climate has come back in.”

Another striking feature of climate change protests so far is that they have included children so young that they are barely able to tie their shoelaces together.

Children from Donabate Portrane Educate Together National School were among the hundreds of primary schoolchildren who protested outside the Dáil and other locations last month.

“I think it’s important that our voices are heard,” says Seána Bernard, a sixth class pupil at the school.

“Older generations don’t really have to live with the consequences, but we do. So it’s important our voices are heard. Because it’s our future.”

Freya Collins, a pupil at Donabate Portrane Educate Together National School, said she hopes the Government will “open their eyes”.

“I hope they see that climate change is real . . . Adults always tell you to own your mistakes, but they’re not actually owning their own,” she says.

At a time when many question the power of ordinary people to effect change, those involved in this Friday’s protest take inspiration the fact that it stemmed from the actions of just one person.

How the Government chooses to address the rising tide, Mira says, will influence the shape it takes once her generation enters the voting booth.

“I want the government to know that we’ll all be voters in a few years, and we’ll definitely only be voting for those concerned about the environment.”

On the day itself, Conal is hoping for international gridlock, and for those in power to take notice.

“I hope the streets of Paris, Berlin, London, New York, Melbourne, and Beijing are shut down,” he says.

“I want Minister for Communications, Climate Action and Environment Richard Bruton to come out and say, ‘the kids are right. This is their future, not mine’.”

Thousands of children are set to skip school on Friday in protest over inaction on climate change. But their actions are posing a dilemma for school leaders and parents.

Is losing out on education really a good idea? Should students be encouraged to take part? Or should the strike be discouraged, ignored or facilitated?

In the majority of schools which have signed up to take part in the global day of action, they have the full approval and consent of teachers and principals.

The National Association of Principals and Deputy Principals says that where there is close consultation between students and teachers, with arrangements negotiated, it is “ acceptable to let children express themselves.”

It was naive in the extreme, and fraught with risks, particularly around online safety and consent

Many principals, privately, say that while the walk-out may be in breach of rules and regulations, they are happy to facilitate on this occasion, though are wary of it becoming a regular occurrence.

Dr Lorna Gold is a lecturer at Maynooth University and author of Climate Generation – Awakening to our Children’s Future, started a Friday lunchtime climate protest outside Leinster House which now involves significant numbers of schoolchildren.

She acknowledges that it presents a headache for those with a duty of care towards children.

In the case of the Friday protests, teachers have typically volunteered to give up their lunch break and accompany groups of students to the protest on a rota.

She notes, however, that Greta Thunberg is technically skipping school without consent every Friday.

Dr Gold also concedes that social media – as with any online activity – presents risks for children in terms of safety, misinformation and possible manipulation.

She says she has been repeatedly contacted via social media by children asking how they should start their own strike.

In one case, a woman added her to a private Facebook chat who wanted to connect children with adults and other children they did not know in relation to the Friday protests.

“It was naive in the extreme, and fraught with risks, particularly around online safety and consent.

“She may have had good intentions, but this episode highlighted the growing challenge of a children-led global strike movement,” Dr Gold wrote recently in The Irish Times.
Carl O’Brien