Royal College of Surgeons in Ireland to be given university status 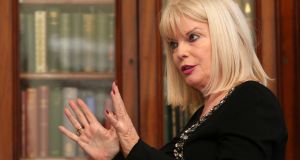 Minister for Higher Education Mary Mitchell O’Connor said the Cabinet has agreed to legal changes which will pave the way for the college to be awarded university status. Photograph: Laura Hutton/The Irish Times

The Royal College of Surgeons in Ireland (RCSI) is set to secure university status within months after the Cabinet approved a change in legislation.

Legal restrictions have prevented the 235-year-old Dublin college from being granted university status even though it is ranked among the top higher-education institutions in the world.

The change is likely to boost the institution’s chances of attracting top international staff, research funding and students.

Speaking at an event at the RCSI on Tuesday, Minister of State for higher education Mary Mitchell O’Connor said the Cabinet has agreed to legal changes which will pave the way for the college to be awarded university status.

“This approval is the culmination of rigorous legal changes sought by me and the Department of Education to enable this new distinction,” she said.

Following the legal change, the college is to describe itself as the “RCSI university of medicine and health sciences”.

The legal change is to be added in an amendment to the Qualifications and Quality Assurance (Education and Training) (Amendment) Bill, which is making its way through the Seanad at present.

Ms Mitchell O’Connor said she expected the legislation will be passed shortly and a process to formally establish the college as a university will be completed "within months".

This process will include a formal assessment of the university by an international panel of education experts against key criteria.

Among the obstacles which have been cited by previous government officials in not awarding the RCSI university status have included the governance arrangement of the college, founded by royal charter in 1784, and the fact that staff are paid privately.

There have also been concerns it could create a precedent for many other institutions to secure university status, which could end up diminishing the status of the term.

The RCSI, based on St Stephen’s Green, has about 3,500 students and trainees and is planning to expand to create a “university quarter” in the area.

It recently built an €80 million medical education building on York Street which it says offers students the most advanced facilities in Europe. Latest global rankings indicate it was in the top 2 per cent of universities.

Prof Cathal Kelly, the RCSI’s chief executive, said he was delighted with the announcement which he said would boost its chances of being ranked in the top 1 per cent of universities.

“For RCSI, it describes what we are: we are a university of medicine and health sciences,” he said. “Being able to call us that is important in order to attract top calibre international staff to Ireland. There really is a war for talent for top-level international academics.”

He said it would also benefit the reputation of Irish higher education generally as well as global rankings.

“Ranking is important. Because we are a single faculty institution, we only participate in the Times Higher Education world university ranking. We only have one institution – Trinity College Dublin – in the top 1 per cent. If you compare us with Scotland, they have four,” Prof Kelly said.

“If you look at the objective parameters, we merit ranking in the top 1 per cent, which is our aspiration... To be able to describe exactly what we are really helps us to articulate internationally who we were.”