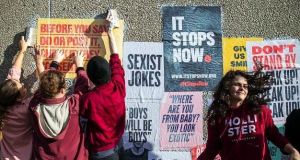 UCC students posting a mural which tackles rape myths and normalised everyday abuse to the wall of the Boole Library. Photograph: Clare Keogh.

Rape and sexual assault at third level is usually hidden.

But last autumn, it tumbled out into the open when the Cork Sexual Violence Centre said it had been made aware of three rapes of first-year college students at the start of the academic year.

Mary Crilly, the centre’s director, said all the victims were young women, aged 18 or 19, who were embarking on what should have been an exciting time of their lives.

“None of them had reported the assaults to gardaí. They felt they should have been able to do something to stop it . . . They also felt that because it was someone they knew, they had put blame on themselves,” she told The Irish Times.

Far from being very isolated incidents, most research suggests rape and sexual assault involving students – especially first-years – is a feature across third-level campuses.

A 2013 Union of Students in Ireland (USI) report Say Something, based on a survey of more than 2,700 students, found 16 per cent of respondents had experienced “unwanted sexual contact”.

Against this backdrop, Minister of State for higher education Mary Mitchell O’Connor has commissioned a working group report on how to tackle sexual harassment and violence at third level.

The report, to be published shortly, outlines a series of steps which third-level colleges should be required to take to help create “safer and more respectful campuses”.

Among its proposals are that third-level colleges should be required to record and report incidents of sexual harassment, assault and rape on campuses, rather than leaving these issues to gardaí.

Significantly, it says each college should report annually on progress in implementing these steps as part of their “compacts”, or performance agreements, with the Higher Education Authority.

Under these agreements, the authority can withhold or deduct funding for underperformance.

Students should also be exposed to workshops and classes to boost awareness and understanding around active consent and sexual violence.

Overall, the aim is to create cultural change to create “safer and more respectful campuses”.

Student counsellors say it is difficult to say with any authority whether incidents are on the increase – as there are no definitive figures – or whether there is simply greater awareness.

Many, however, detect a change among a generation that is eager to set clear boundaries and call out unwanted sexual advances.

One of the first colleges to introduce classes on consent was NUI Galway.

Since 2015, more than 2,000 third-level students have taken part on a voluntary basis in its “smart consent consent workshops”.

Dr Pádraig MacNeela, a senior lecturer at NUI Galway, says its surveys show students who participated feel better informed about consent and are more likely to feel they have the skills they need.

Different versions of consent classes have since spread to other universities such as Trinity College Dublin, University of Limerick and University College Cork.

The idea of consent classes, however, has not always been been fully embraced.

When Trinity introduced sexual consent classes for first-year students living on campus a few years ago, critics labelled it as “neo-puritan preaching” that would treat all young men as potential sex offenders. UCD’s first attempt to provide consent workshops were cancelled because attendance was so low.

Many other colleges and institutes of technology do not have have such classes or, if they do, they tend to be ad hoc and small-scale.

One frustration among campaigners on these issues is that most of these initiatives have been driven by students’ unions rather than college authorities.

USI president Siona Cahill has pointed out that too often these issues are not recognised at the upper echelons of institutions.

“For example, no university has a specific policy for dealing with sexual assaults on campus. Instead, it’s dealt with under the wider ‘dignity and respect’ policies, which are more appropriate for bullying,” she said last year. “So, if a student is the victim of a rape or assault, it’s dealt with by the gardaí. Yet that same victim may be sitting in the same class as the perpetrator.”

The new report, however, says senior management will need to take a lead on ensuring students have access to consent classes and that structure are set up to report and investigate sexual harassment.

The next question which campaigners will be want to know is whether these well-meaning proposals will be implemented? Or will they gather dust on a shelf?