Sharp drop in CAO applications from UK amid Brexit uncertainty

Demand up for language, humanities courses and down for journalism, theology 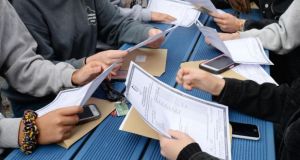 There has been a sharp drop in students from Britain and Northern Ireland applying to study in the Republic amid continuing uncertainty over Brexit.

A breakdown of latest Central Applications Office (CAO) figures for 2019 shows applications from Northern Ireland are down by 18 per cent annually while those from Britain are down 13 per cent.

The downward trend comes amid concerns among many UK students that fees for courses could jump dramatically in the event of a hard Brexit. However, the Government has recently pledged to shield these students from any increased costs in a bid to protect the cross-border flow of students.

By contrast, the number of undergraduate applications from EU countries is up by 9 per cent over last year.

Overall, there are a total of just over 73,000 CAO applications this year, up by 1 per cent on last year.

A breakdown of first preference applications for honours degree courses shows broadly where demand is up or down. This influences whether CAO points requirements are likely to rise or fall.

Points increases are most likely in courses where sharp increases in applications such as those linked to transport (up 100 per cent), humanities (up 41 per cent) and languages (up 20 per cent).

There are also significant increases for courses in agriculture, biological and related sciences, which are both up 13 per cent, and engineering, which is up 11 per cent.

Points decreases are more likely in courses which show a sharp falls in applications, such as those linked to theology and classics. which are down 56 per cent, and journalism and information ( down 51 per cent).

Arts, business and health meanwhile, remain the most popular choices for students this year, though there are few significant changes in applications patterns compared to last year.

Health-related courses such as nursing and medicine are the single most popular area of course choice, followed by business , arts , social sciences , education , information technology and law

This year’s CAO data also provides a more detailed breakdown of applications for “specialist groups” such as medicine, nursing and teaching.

Applications for teaching are up slightly, with primary education and secondary education both up, by 1 per cent and 8 per cent respectively.

There is a mixed pattern in health-related areas such as dentistry (up 6 per cent); nursing and midwifery (down 3 per cent); pharmacy (up 16 per cent); and physiotherapy (down 9 per cent). There is no change for medicine or veterinary medicine.

While there is continuing uncertainty over Brexit, the Government has sought to reassure students from Northern Ireland and Britain that they will not face any hike in fees in the event of a hard Brexit.

The Government has previously committed to freezing fees for UK students starting undergraduate courses in 2019.

Similarly, the British government has said Irish students planning to start university in the UK this year will not face a hike in fees.

However, in the Oireachtas this week, the Government pledged to protect UK students from fee increases on an ongoing basis in the event of a hard Brexit.