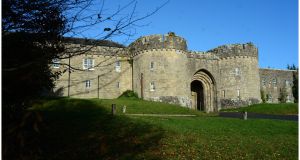 Glenstal Abbey in Co Limerick, where fees are up to €19,300 for boarders, has recorded its largest enrolment in its 80-year history. Photograph: Bryan O’Brien

Fees and pupil numbers in private schools are returning to levels not seen since the economic boom, new figures show.

Enrolment at boarding schools in particular is growing, where fees now range from between €8,000 and almost €23,000.

This marks a dramatic change in fortunes compared to the economic downturn when a significant number of private schools struggled and entered the free education scheme to survive.

The most expensive school this year remains St Columba’s in Whitechurch, Dublin, which charges €8,000 for day pupils and up to €22,800 for boarders.

St Columba’s principal Mark Boobbyer said the turnaround since the recession has been dramatic.

“In 2008, we kept the school full, but we kept it full largely with overseas children . . . because Irish people couldn’t afford to pay the fees,” he said.

Alexandra College in Dublin’s Milltown, which charges between €7,241 for day pupils and almost €18,000 for boarders, says demand for boarding is also on the rise, with numbers almost doubling since the low point of the recession.

A key growth area for some is “day boarding”, where pupils can avail of evening meals and supervised study.

For example, Glenstal Abbey in Co Limerick, where fees range from €11,550 for day boarding pupils to €19,300 for boarders, has recorded its largest enrolment in its 80-year history.

Most fee-charging schools, meanwhile, have increased their fees this year by an average of about 4 per cent. Typical day pupil fees now range between €3,500 and €7,000.

International students are also helping to boost numbers across many fee-paying schools, with some planning for additional increases due to uncertainty caused by Brexit.

A new private international school, set to open its doors in Leopardstown this coming September, is one of those banking heavily on a Brexit boost.

Nord Anglia International School Dublin, which will open an 800-seat campus in South County Business Park, will become the country’s most expensive school, charging fees of up to €24,000 a year.

It will teach students ranging in age from three to 16 years the International Baccalaureate.

Former film producer David Puttnam will act as chairman of the school’s advisory board, together with other members including former minister for education Ruairí Quinn.

Unlike most private schools in Ireland, Nord Anglia’s teachers will be paid privately as it will not follow the State curriculum or other public sector rules.

By contrast, most teachers’ salaries across the 51 fee-charging schools are paid for by the State at a cost that is equivalent to more than €90 million.

These State subsidies were reduced during austerity-era cost-cutting which saw fee-paying schools given a worse pupil-teacher ratio (23:1) compared to schools in the free scheme (19:1). This was on the basis that private schools could use their own resources to hire additional subject teachers or ancillary staff.

A report commissioned by the then minister for education Ruairí Quinn into the income of private schools, published in 2013, estimated that they had more than €80m extra a year to invest in additional support and facilities for their pupils thanks to the income from fees.

While there have been calls from some Opposition parties for State funding of teachers’ salaries in private schools to cease, a spokeswoman for the Department of Education estimated this would end up costing the taxpayer at least €23 million.