The rise of private schools: ‘There’s a lot more money around’

As the economy grows, more parents are opting for private education for their children 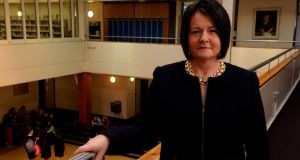 Barbara Ennis, principal of Alexandra College in Dublin 6: “Parents have a choice and they want to invest in their children’s education.” Photograph: David Sleator

Not so long ago, many private schools were facing falling student numbers, government funding cuts and an uncertain future.

Several private schools opted to axe their fees and join the free education scheme, where the Department of Education pays full staff costs.

Today, against the backdrop of a growing economy, enrolment in private schools is on the rise again and set to match boom-time highs soon.

Boarding schools in particular are reporting increases in pupil numbers.

The option of so-called day-boarding – in which pupils have access to meals and supervised study but do not stay overnight – is proving increasingly popular in some schools.

Fees, too, are on the rise, with most private schools recording modest year-on-year increases in fees of about 4 per cent on average.

St Columba’s College in Whitechurch, Dublin retains the highest day fees in the country at €8,000 annually, despite slashing its fees two years ago from over €12,000.

Mark Boobbyer, principal of St Columba’s, says the school has seen a huge jump in enrolment applications since.

He believes €8,000 is an “appropriate” price for the school as it includes after-school study, meals, and co-curricular activities such as sport.

All these schools have recorded increases – in some cases substantial – in pupil numbers over the past academic year.

As enrolments rise, so too do fees. Most fee-charging schools have increased their fees this year.

Some of the bigger increases in fees were at the Teresian School in Donnybrook, with fees up from €4,950 to €5,360 this year (an 8 per cent increase).

While boarding has been declining in popularity over many years, there are signs that it remains in high demand among many of the 20-plus schools that offer it.

St Columba’s boarding fees are also among the highest in the country, with seven-day boarding costing up to €22,797.

A key growth area for some is “day boarding”, where pupils can avail of evening meals and supervised study.

For example, Glenstal, which offers day boarding to pupils from €11,550, has recorded its largest enrolment in its 80-year history.

While most private schools are flourishing again, it’s not the case with all schools by any means.

Notre Dame secondary school in Churchtown, Dublin, has announced its impending closure due to financial difficulties, having seen enrolment numbers fall from 181 in the 2013-2014 academic year to 128 last year. It said it was struggling to repay loans, keep pace with rising operating cost and meet the need for significant investment in infrastructure. It is due to close in June 2019.

Cistercian College Roscrea reversed its closure plans this year, but only after a €1.5 million fundraising drive, spearheaded by former pupils.

Séamus Hennessy, the school’s director of admissions, said he hoped it would “secure [their] future for another century at least”.

It started to admit day pupils from the locality for the first time in September 2017.

“It is performing very well, well beyond our expectations, and already interest for next year, and following years, is growing significantly within the day structure,” said Mr Hennessy.

“I think the majority of people who are enrolling in any school are looking towards results, and we have been very lucky with hard-working teachers, staff and students. For as long as I can recall, we’ve had excellent results, and this year was no different.”

Other schools have difficulties of an altogether different kind: turning potential students away.

“During the recession years, our numbers did not fall and we continued to have a significant waiting list. While we have noted a rise in demand for places in recent years, the college has no plans to increase student numbers,” says headmistress Joan Kirby.

Barbara Ennis, principal of Alexandra College in Dublin 6, has also noticed an increase in enrolment applications, particularly those of Irish families returning from the UK as a result of Brexit, and from China, due to an immigrant investor scheme, which grants residency in Ireland and a visa for cash.

She says parents are prepared to pay for private schools which have developed a solid reputation over many years.

“You get what you pay for – parents have a choice and they want to invest in their children’s education, the greatest gift they can give.”