“We chose to make a film about Mosney . . . it makes us feel like we’re doing something useful”

Six Syrian refugees are studied in a digital media workshop in Trinity College to help them embrace technology when telling their stories. 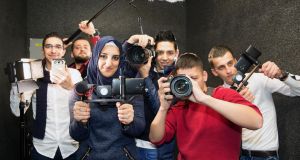 Noureldin Zaamout hopes to study graphic design when he finishes school. The 17-year-old student also plans to learn more about photography and architecture but for now, unfortunately, education must remain on hold.

Noureldin and his family are still waiting to hear about housing possibilities outside the Mosney direct provision centre where they have been staying since they arrived from Greece last December.

Noureldin has taken an English course but is reluctant to start secondary school until the family knows where in Ireland it will be transferred. The wait is difficult, he says. First the wait in Greece, now the wait in Ireland. It feels never-ending.

Noureldin is speaking inside a brightly coloured cabin that sits hidden in a courtyard behind a large glass building on Nassau Street in Dublin. Beside him sits his older brother Mohammed, and on a nearby table lies an array of recording devices.

The brothers are in Dublin for two weeks to take part in a digital media workshop with four other young refugees from centres in Ballaghaderren, Roscommon, and Meath.

The programme, which is funded by the online video platform ALTV.com and is organised with Connect, the Science Foundation Ireland Research Centre, aims to teach refugees basic skills in online video journalism, explains Mai ElMahy, project co-ordinator for the workshops.

She says the Ismani (Arabic for ‘Hear Me’) course has given the participants the chance to mix with Irish people every day for a fortnight, something that is difficult when you are living inside a hostel surrounded by other refugees.

ElMahy is Egyptian and moved to Ireland six years ago to work with Facebook. Earlier this year she travelled to Greece to volunteer in refugee camps and since her return has worked with refugees living in Ireland.

“It’s mainly about creating opportunities for them in the future, but it’s also giving them a chance to tell their stories through video and give their work more exposure around the world. It’s really good for them to integrate with the Irish instructors and chat together at lunch and dinner,” she said.

“It’s also a mix of genders all learning together in the same room. All the stereotypes have been broken on this course.”

Ghassan Shamet has always dreamed of becoming a journalist but also loves comedy and hopes to set up his own YouTube channel. The 21-year-old left his home city of Deir ez-Zor in 2016 to travel to Turkey where he took a boat across the Aegean Sea to Greece. He arrived in Ireland in February 2017 with his cousin.

“My parents could not leave Syria with me because we didn’t have enough money. If I stayed I would have to do military service, so they decided I should leave. If I stayed in Syria I would have to fight but I miss my family very much. Even for single men it’s very difficult (being alone) because sometimes we need our mums or our family. We used to be able to go home and see our mum, but if you are alone everything is very difficult.”

Shamet is no stranger to cameras since his appearance in the Ireland’s Refugee Hotel TV3 documentary earlier this year. He said the TV appearance gave him the opportunity to explain to Irish people how it feels to be a young Muslim man living alone in a foreign country.

“Some people say refugees are bad because they are Muslim so I need to tell people my story. I am Muslim ,but I don’t like fighting. I want a good life and for all people to live happily together.”

Taqwa Alhariri arrived in Ireland last December with her sisters and mother and is living in Mosney direct provision centre while the family wait for a house. Like Shamet, Alhariri and her family paid a smuggler to cross the sea between Turkey and Greece.

“I can’t forget that day. There were 45 people in the boat and we stayed three hours in the sea after midnight. There were lots of children crying with old men and women in the boat. It was a horrible day, but thank god we reached the beach in Greece.”

Alhariri studied Arabic literature at university but has always wanted to be a journalist. “I’ve lived in four countries, and I’ve faced a lot of things in my life. I’d like to know more about the world and tell stories through film and journalism. Also it’s a benefit for Syrian people to be able to tell the world about what’s happened in Syria.”

Noureldin and Mohammed are also eager to use their new digital journalism skills to share their stories as refugees to a wider audience.

“We chose to make a film about Mosney because we really wanted everyone to know what life is like for a refugee, not only in Ireland but in any European country,” says Mohammed. “It makes us feel like we’re doing something useful.”

His younger brother agrees that it’s important for people to understand what life is like for refugees. “That’s why we chose the film we’re doing. It’s not only about me. We can help other refugees by telling their stories through video.”