The issues set to dominate Irish education in 2018

A crisis in teacher supply, senior cycle reform and the rise of apprenticeships: you’ll hear plenty about these issues in the coming year – but will any of them be resolved? 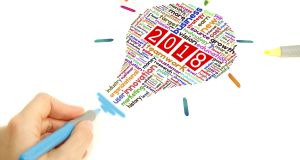 Teacher supply
We’ve ambition in spades when it comes to becoming the best in Europe. But there’s a major problem: where are we going to find the qualified teachers to teach key subjects?

Many schools currently report acute difficulties recruiting teachers for Stem and languages. Some students are going for months on end without qualified teachers. The pipeline of teachers due to graduate in these subjects indicates the problem may well get worse. The matter has been left drift for too long. The Government will need to take decisive steps this year, such as subject quotas for teacher-training, or financial incentives for science or language graduates to study teaching.

New-entrant pay
The two-tier pay gap is set to dominate teachers’ conferences at Easter. Those hired after January 2011 still earn less than their more experienced colleagues – though the bulk of the gap has been bridged.

Expect plenty of heat at these gatherings – but much not much light. That’s because the public sector pay commission (known informally as the “route to the loot”) isn’t due to report until autumn. Additional money – if any is agreed – won’t be available until 2019 at the very earliest.

Primary curriculum
The biggest shake-up to the primary curriculum in decades is coming. A major report is due towards the end of this year. Based on research on how children learn, the NCCA (National Council for Curriculum and Assessment) is set to place a much greater emphasis on creative play during the early years of primary. Schools may also be given more flexibility on time allocated to religion or patrons’ programmes. This may, in time, lead to religion being taught outside the regular school day.

Population surge
The baby boom of recent years means our primary school population is set to peak next September. This population bulge is set to pass through to second level in a few years’ time. That’s why there’s such frantic school-building taking place. The building programme is also under pressure, having slipped behind target in 2017. Money is also tight this year – so much so that minor works grants won’t be paid this year. If there’s further slippage, given the demand for school places, things could get very tricky.

Leaving Cert reform
Now that junior cycle reforms are taking root, all eyes turn to the the senior cycle. Critics say reform is long overdue and we need a new curriculum and assessment model which fosters the kind of skills young people will need over the coming years: teamwork, critical thinking, communication and creativity, to name but a few buzzwords.

A major conference is due this year – hosted by the NCCA – which will set the ball rolling. It’s not before time; nevertheless, expect opposition and dire warnings from radical elements in some teachers’ unions.

Technological universities
New legislation due to commence soon will pave the way for the first technological university. The idea is that by merging institutes of technology, we can create larger and more powerful institutes of technology. A DIT-led university will likely be the first to meet the criteria towards the end of 2018. A formal name-change and merger is probably a while off yet, as there will be a lead-in time for prospective students.

Do we really need them? Time will tell if they are a good idea – or simply a poor imitation of our existing universities.

Apprenticeships
We are sending record numbers of school-leavers to higher education, while the proportion going to apprenticeships has collapsed.

If we’re serious about ramping up apprenticeships, this will be a crucial year. At least 20 new programmes are due to come on stream over the next year or so, ranging from computer animation to cybersecurity.

Under targets set by Minister for Education Richard Bruton, it is hoped they will be an option for up to 20 per cent of school-leavers. Progress so far is slower than expected, while critics wonder if there’s enough political will behind it. This year will reveal much.

Baptism barrier
The planned removal of the “Baptism barrier” in legislation due later this year is an encouraging step forward for anyone who wants an equality-based school system. If implemented, it will mean oversubscribed Catholic schools will not be entitled to prioritise children of their own religion ahead of others who live closer to the school. The Government will need to hold firm and steer this legislation on to the statute books.

University rankings
Irish universities have been tumbling down most global university rankings until recently. While additional funding has been allocated for higher education this year, colleges say it’s a drop in the ocean. Funding per student will remain static, at best. Our research budgets are also small by international standards This, combined with large class sizes, could well see many institutions slide down the rankings again.

Special needs
Spending on higher education has climbed by almost half a billion euro since 2011, an increase of about 40 per cent. The State is investing more in special education than in all of higher education. It’s little wonder that Minister for Finance Paschal Donohoe – whose job is to keep public spending under control – is concerned. A review of the special needs assistant scheme is due this year. Will it help provide a better response to children’s needs? Or will it be a cover for cost-cutting? We’ll find out soon.

Skills gaps
The economy is growing quickly, but there are alarming skills gaps opening up in key areas such as construction, hospitality and science. School-leavers are just one source. We lag way behind other countries on lifelong learning and upskilling. We’re likely to see this as a growing issue this year.Springboard courses – which used to be targeted at unemployed – will most likely expand to include those at work who are interested in switching careers.

Young readers
Our 10-year-olds were rated as the best readers in Europe, and among the best in the globe, according to a major international study. Teachers, policymakers, parents – and pupils: please take a bow

INTO
Most expected higher education would be the big winner in the Budget. Instead, the primary teachers’ union helped secure funding to reduce class sizes to a record low.

Equality campaigners
Groups such as Equate helped secure a political commitment from Richard Bruton to remove the “Baptism barrier” from entry to primary school.

ASTI
Kamikaze-style industrial relations tactics by its leadership saw the union lose members, along with pay losses for teachers. A grassroots revolt in June restored sanity.

University of Limerick
Allegations of mismanagement and poor human resources practices tumbled into the open, leading to an investigation. Its new president has pledged to take sweeping action to restore its reputation.

KWETB
The Kildare and Wicklow Education Training Board is being investigated over potential conflicts of interest and other concerns. Its chief executive has just stepped down before the report is published this year, while the board’s chair and vice-chair have resigned.