Why thousands of traffic cases are now in doubt 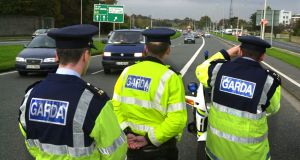 An initial fixed-charge notice for driving while holding a mobile phone can be settled with the payment of €60 within 28 days. If paid within 28-56 days, the charge is €90. After 56 days, a summons is issued. Photograph: Cyril Byrne

Road traffic prosecutions are being “thrown out across the country”, a legal source said on Wednesday, because of a finding that part of the fixed-charge regime is unconstitutional.

Fixed-charge notices can be issued in relation to offences such as driving without an NCT cert, parking in a dangerous position, running a red light or driving on the wrong side of a continuous white line.

However, an important part of the regime has now been declared unconstitutional arising from two cases involving people caught driving with their mobile phones in their hands, who challenged the fairness of the law.

Barrister David Staunton, for the State, told the High Court on Wednesday there were approximately 28,000 prosecutions in train that would be affected by the court having found in the drivers’ favour.

Ms Justice Úna Ní Raifeartaigh announced her decision on October 8th that she believed section 44.10 of the Road Traffic Act was unconstitutional. She delivered her written judgment on Wednesday.

In the period since October 8th, according to the legal source, District Court judges have been throwing out affected cases, knowing that the constitutionality of the law has been found wanting.

Staunton told the court on Wednesday there was “no definitive view taken” as yet by the State as to how it intended to respond.

A spokesman for Minister for Transport Shane Ross said his department would examine the judge’s written ruling “and take it from there”.

The ruling concerns a 2016 amendment to the Road Traffic Act. The amendment came into force in June 2017.

Under section 35 of the Act, a summonsed person cannot be convicted if it can be shown that they had not been served with an initial or first, fixed-charge notice.

However section 44.10 of the same Act (the 2016 amendment) says that a summonsed person cannot use the claim that they had not received a first, fixed-charge notice, as a defence.

Ms Justice Ní Raifeartaigh said it was her view that this “conundrum” meant a person cannot get a fair trial. The Oireachtas “cannot have its cake and eat it too”.

She speculated that the amendment may have been introduced to stop “chancers” who tried to undermine the penalty points system by falsely claiming they had not received their fixed-charge notices.

Legal sources say that before the amendment was introduced, it was common to have up to 80 per cent of the people who appeared before a District Court sitting on road traffic offences claiming they had not received the fixed-charge notice.

The two people whose cases were before the High Court had argued they had not received their first, fixed-charge notices.

Despite the District Court judge accepting this was the case, both were convicted on the basis that section 44.10 gave no discretion.

Solicitor John Rogers, of Rogers Law, who represented both clients at District Court level, helped them appeal the rulings to the High Court, where they were represented by Feichín McDonagh SC and Brendan Hennessy.

Ms Justice Ní Raifeartaigh has indicated a simple change to the law could solve the problem.

The Oireachtas could amend the Act again, so that District Court judges would have the discretion to accept that the fixed-charge notice had not been received.

Another response to the problem was also flagged by the judge. “Requiring service to be effected by registered post might be another solution to this potential problem” of disputes over service.

A similar point was mentioned by traffic offences expert solicitor Evan O’Dwyer earlier this month when he spoke to The Irish Times.

In his view the only way to finally sort out the fixed-charges regime is to “fix the fundamental issue” and serve fixed-penalty notices in such a way that delivery to the person being accused is fully recorded.

O’Dwyer said there was not a court he went into where he didn’t hear the defence being made that a notice had not been received.

One of the legal issues canvassed by Ms Justice Ní Raifeartaigh in her ruling was the meaning of the law when it referred to a notice being served.

Sending a registered letter in the Republic costs €8, though it is likely An Post would give a rate as low as €3 per letter for bulk service.

An initial fixed-charge notice for a person accused of driving while holding a mobile phone can be settled with the payment of €60 within 28 days. If paid within 28-56 days, the charge is €90.

After 56 days, a summons is issued. A second notice is also issued, saying that if a fine of €120 is paid at least seven days before the pending court appearance, the prosecution will be discontinued.

If the case goes to court and the person is convicted, the court applies the appropriate fine. In all instances, penalty points also apply, with the larger number of points applying to cases that end with court convictions.