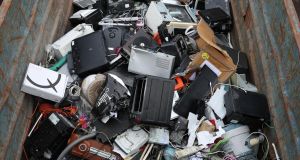 Criminal gangs are stealing and selling scrap metal to fund major drugs deals and harassing and intimidating waste industry workers, the Government has been warned.

The State’s largest waste company Beauparc, has said workers, who have been told that their houses will be burned down, are too afraid to testify in prosecutions for fear of retribution.

Gardaí have told Beauparc that cash sales “are acting like seed capital for organised criminal gangs”, the company has told the Minister for the Environment, Richard Bruton.

Warning that it is experiencing a “near crisis” at its 18 sites, the company, which employs 2,000 people in its Panda, Greenstar and A1 waste brands, wrote last year to Garda Commissioner Drew Harris.

Following the letter, Beauparc said gardaí upped patrols for a time, but it complained that they later fell away and metal theft is now back to levels seen last November.

“Our staff are tired, scared and frustrated,” the company told the Minister for the Environment in a letter, which has been released under the Freedom of InformationAct.

Existing legislation is insufficient, while staff refuse to press charges because too many perpetrators in the past have received the Probation Act, the company wrote: “Our sites gets targeted for arson, burglary or vandalism.

“We simply cannot afford to lose sites, equipment and vehicles through arson attacks and we cannot afford the level of security that would be needed to secure our sites fully.”

Calling for a ban on cash sales of scrap metal, as in the UK, Beauparc said the existing rules for metal dealers to prove the traceability of waste were not working.

The Department of Justice is currently working on legislation to eliminate cash payments in the “cash for gold” business, but this does not extend to non-precious metals.

Measures that prohibit cash payments for scrap metal are complex and may only be introduced by primary legislation rather than by amendment to regulations, officials have said.