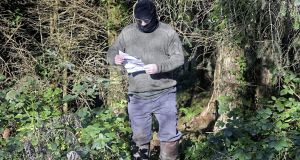 A masked man was photographed with a statement threatening directors of Quinn Industrial Holdings (QIH) this week. Photograph: Courtesy of the Irish News

Two directors of the Co Cavan-based Quinn Industrial Holdings (QIH) warned on Wednesday evening that the Border region is “perilously close” to becoming lawless and could become “ungovernable” unless threats against the company’s directors are dealt with.

Liam McCaffrey, chief executive of QIH, also warned that a “properly resourced cross-Border taskforce” could be necessary to bring a halt to the threats if the current Garda/Police Service of Northern Ireland (PSNI) investigation does not lead to arrests and convictions.

“If it doesn’t work,” he said, “then it almost says the structure of policing around here is wrong and that’s when we need to start to look at an alternative solution.”

Mr McCaffrey and four others, all directors of QIH, were advised on Monday that a fresh threat, which warned of a “permanent solution” unless they resigned their positions, had been made against them.

Those threatened include Kevin Lunney, who was abducted from outside his Co Fermanagh home last month and tortured before being dumped on a road in Co Cavan.

Mr Lunney returned to the company’s offices for a brief period on Wednesday in what was his first visit since he was attacked.

“His leg is sore, it’s broken in two places and it’s had a pin put into it but he is starting to walk again with the aid of crutches,” said Mr McCaffrey.

“Obviously he’s got a way to go in terms of his physical recovery but he’s in good spirits,” he said.

Additional security precautions have been implemented at QIH buildings, and particularly at the offices of the company’s executives. The firm has also provided counselling for employees.

John McCartin, who was among those named in Monday’s threat, said it was “abundantly clear” that those responsible were now “emboldened”.

“There is little fear of the policing authorities on either side of the Border and the rule of law is now challenged,” he told The Irish Times.

“Unless it’s dealt with, and dealt with decisively now, the region just becomes ungovernable.”

Mr McCartin said he had spoken to Taoiseach Leo Varadkar in the wake of the fresh threat and he was confident the police response was “robust”.

“We discussed the situation at length,” he said, “and it was quite clear from his discussion that he is very troubled by this and is taking it very seriously.”

Mr McCaffrey said there had been “significant upscaling of both PSNI and Garda activity” in the wake of the attack on Mr Lunney, and he believed progress was being made and “full resources” had been allocated.

“We’ve always been left out on the frontier to deal with it, there’s no question about that. The Border does make policing difficult, and people can use it to their advantage.”

Fr Ollie O’Reilly, who condemned the perpetrators of the attack on Mr Lunney from his altar in Ballyconnell, Co Cavan last month, said he believed the latest death threat is a sign the gang is under pressure but warned of the increased risk it poses and that those involved were now at their “most dangerous.”

“A wounded tiger is a dangerous beast and I am talking about the collective tiger,” said Fr O’Reilly, who blamed the attack on Mr Lunney on “a Mafia-style group with its own godfather” during a homily last month.

“I think they are surprised that people are fighting back, both the company and others. There is pressure being brought to bear. I know there are accusatory letters going to people who never got them before.”

Fr O’Reilly said he was “shocked and appalled” at the latest threat to QIH directors.

“They are most dangerous at this stage in many ways because they are under pressure. They could lash out and I don’t think discipline would be great among them,” he said.

The priest said the fresh threat had “caused more fear and more panic” within the local community in Cavan and Fermanagh, and he hoped it would lead to more proactive measures by police in the area.

“It is very chilling. These people are psychopathic so they are not your normal run-of-the-mill common thieves or petty criminals. They are dangerous criminals,” he said.

The threat issued on Monday also contained a warning that “anybody who removes signs, whether that be council employees or outside contractors, will be targeted.”

“When people can erect signs – and they’ve been left there for a year and a half now at this stage – and that is not addressed because these people issue threats to county council employees, that to me speaks to an area that is not being policed,” said Mr McCaffrey.