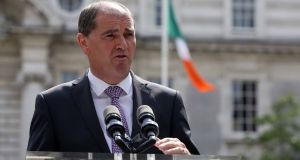 Paul Kehoe, Minister of State for Defence. In response to a parliamentary question this week Mr Kehoe said the uniforms had ‘zero monetary value within Civil Defence’ as they had all been discontinued in 2006. Photograph: Sam Boal

The Department of Defence has asked An Garda Síochána to investigate how Civil Defence uniforms donated for use in Pakistan ended up on sale in markets around Ireland.

In 2017 the department, which administers the Civil Defence, donated hundreds of uniforms and pieces of workwear to a disaster relief charity. The Civil Defence, a volunteer-based organisation, had no further use for the uniforms as they were discontinued in 2006.

The clothes were donated to Disaster Relief by Irish and Pakistanis (DRIP), a Waterford-based charity, on the basis they would be used by disaster-relief and emergency medical workers in Pakistan.

Last month, the department became aware that some of the donated uniforms had turned up at markets in various locations around Ireland.

It has now asked the Garda and the Charities Regulator to examine the matter. However, it is understood gardaí have informed the department there is little they can do as the Civil Defence was no longer the legal owners of the uniforms.

“The department has been examining the matter since mid-September 2019 when officials were first informed that the donation had not been managed by the charity as intended,” a department spokeswoman said.

The regulator was informed last week but has yet to begin a formal inquiry. It is understood it is examining if any regulations may have been breached in the handling of the donations. A spokeswoman declined to comment.

The items were gathered by the department and delivered to the Civil Defence headquarters in Roscrea, Co Tipperary. The uniforms were then loaded into a trailer organised by the charity and brought to Portlaoise where they were placed in storage in preparation for transport to Pakistan. It is understood none of the uniforms made it out of the country.

The charity is a volunteer organisation which is registered with the regulator. It was set up in the wake of the devastating Kashmir earthquake of October 2005. “The mission is to continue the rehabilitation efforts and join hands in future for any disaster in Pakistan and Ireland or anywhere in the world,” the charity’s website states.

It was selected by the department as the recipient of the uniforms based on its previous work with the National Ambulance Service.

According to the regulator, in 2017 the charity had a gross income of €2,713 against expenditure of €7,721. Last year its income dropped to €790 against €632 in expenditure. The charity did not respond to requests for comment on Thursday.

In response to a parliamentary question earlier this week Minister of State for Defence Paul Kehoe said the uniforms had “zero monetary value within Civil Defence” as they had all been discontinued in 2006 and replaced with the current orange and navy uniform.

The Civil Defence is a 3,500-strong organisation that operates under the command of local authorities to assist the emergency services. Among its primary functions are search and rescue operations and disaster relief.