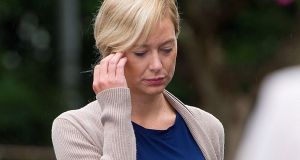 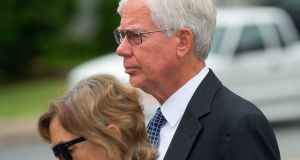 The jury in the trial of a former FBI agent and his daughter accused of the murder of her husband, Limerick man Jason Corbett, in the US has retired to consider its verdict.

On day 15 of the trial of Molly Martens Corbett (33) and her father Thomas Martens (67), who are charged with second-degree murder in connection with an incident in the early hours of August 2nd, 2015, when Mr Corbett was found beaten to death inside his home in Wallburg, North Carolina, the jury was sent out after closing arguments in the case.

They have both pleaded not guilty at Davidson County Court in Lexington, North Carolina, to murder, claiming self-defence and the defence of another. A voluntary manslaugher charge was included as a lesser charge for the jury to consider on Monday.

Judge David Lee charged jurors with the task of finding the defendants guilty or not guilty of second-degree murder. In order for either to be found guilty of the charge, the jury must find that Mr Corbett was wounded intentionally by one or both of the defendants, and it must be determined the injuries sustained were sufficient to cause death, he said.

Second-degree murder regards the notion of intent as a necessary component. The jury need not believe either set out to kill Mr Corbett, but rather they intended to strike him and those blows resulted in his death. One last element must verify the defendants were not acting in self-defence, the judge said.

If the jury decides the prosecution failed to prove any of those elements, they must find them not guilty of second-degree murder.

A lesser charge was included as a possible verdict. If the jury finds the defendants were acting in self-defence, but acted beyond what was necessary to evade the imminent threat, they can find one or both defendants guilty of voluntary manslaughter.

This charge would indicate the killer or killers used excessive force, and that he or she intended to inflict wounds that ultimately killed Mr Corbett.

In closing arguments earlier, attorney David Freedman, defending Mr Martens, contrasted the decorated career of his client to that of Mr Corbett, a man he portrayed as someone who used alcohol to cope with his instability.

Mr Freedman presented his client as an American patriot, hero and father.

“Who is more likely to snap, a 65-year-old grandfather who spent his life protecting this country from drug dealers or a man who, out of his own mouth, stopped taking his thyroid medicine . . . and gets angry for no reason?” Mr Freedman asked.

“What could be better than creating problems for yourself and dealing with those problems by drinking seven or eight beers while looking after your eight-year-old?”

Mr Freedman discussed the prosecution’s insistence that Mr Martens was calm throughout. “He was calm,” Mr Freedman said. “He was a calm guy . . . Jason made himself a ticking time bomb by not taking care of himself. Why would he throw away his life to take out a man with a little-league baseball bat?” Mr Freedman asked. “He wouldn’t.”

“Tom Martens woke from a dream to a nightmare,” Mr Freedman said, approaching the jury. He then began to draw correlations between his duties with the FBI and those as a father. “He served us. He has protected us. That’s what he knows to do: protect.”

Closing arguments were given by the defence for Molly Martens Corbett on Monday afternoon.

Defence lawyer Walter Holton had questioned the evidence presented by the prosecution, reminding the jury fingernail clippings were not preserved at the scene.

He asked about hair in Mr Corbett’s hand that was not discussed by prosecutors, but was acknowledged by a Davidson County crime-scene investigator.

“Thank God for Lt [Frank] Young,” said Mr Holton. “Had he not taken a picture of that hair, we would have never known.”

Utilising an easel before the jury, he demonstrated for jurors a number of theories in the case.

He encouraged jurors they could believe any or none of the arguments he presented, but if even one seemed reasonable, they must acquit the defendants.

“If you find a reasonable doubt, your job is done,” he said. “You only need one.”

Finally, the attorney summarised his questions, turning to the prosecution and stating his assertion it did not prove its case.

Striking an aluminium baseball bat against inanimate objects inside the courtroom, Mr Martin shouted as he slammed the bat before the jury.

“What type of force did it take to split the skin from the skull?” he asked.

He repeated that the flesh was ripped from the bone, comparing the acts that killed Mr Corbett to stripping away meat when cutting a steak without a knife.

“They beat him to the point his injuries were similar to those in falls from great heights and car crashes,” Mr Martin recalled from previous testimony. “Jason Corbett is not here to tell you where they beat him, but his blood tells you.”

In another demonstration, fellow assistant district attorney Greg Brown laid face down on the courtroom carpet as Mr Martin mimicked the movements of assault in the incident with dry swings of the bat.

Mr Martin revisited the testimony which explained pieces of scalp were embedded in the paving brick.

He also pointed to what he considered the frailty of the defence’s case.

“The defence would have you believe their case hangs by a single strand of hair,” referencing the hair in Mr Corbett’s hand the defence said was undocumented evidence.

Directing his comments to the jury, he said Mr Martens was no longer an FBI agent. Instead, he explained, the state would suggest he murdered a man.

“Now the enemy isn’t Russia, the Chinese or North Korea,” Mr Martin said. “The enemy, when you cave a man’s skull in, is justice.”