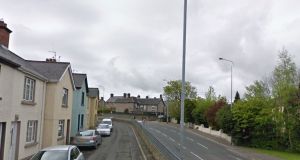 A pipe bomb was thrown through a bedroom window at a property in the Melmount Villas area of Strabane (general view above) on Monday at about 8.50pm. File photograph: Google Street View

A pipe bomb landed on a woman’s bed after it was thrown through the window of a house in Co Tyrone during an attack being blamed on dissident republicans by the PSNI.

The device was thrown through the bedroom window at a property in the Melmount Villas area of Strabane on Sunday at about 8.50pm. It was reported to police on Monday.

The woman, in her 60s, who was sleeping at the time, was left “deeply shocked” but uninjured. Another person in the house lifted the pipe bomb and threw it into a nearby hedge.

The device was made safe by army technical officers and then recovered by police for forensic examination.

On Tuesday, PSNI chief inspector Alan Hutton described the attack as “reckless”. “I will fairly and squarely point the finger at violent dissident republicans and I know there are people of all shades who will condemn this act,” he said.

“This was a reckless attack on the local community which could have caused serious harm.

“Those who threw this device have clearly no regard for the people living here. “This is a very small minority of people in Northern Ireland who have carried out this attack and I am appealing for the community’s support in identifying the perpetrators and bringing them to justice.”

He appealed for anyone with information to come forward.

Ireland ‘not at all happy’ about ‘disproportionate’ fish quota loss - Minister 13:54
Two charged with trying to murder man in Dublin shooting last year 13:42
Weekend weather warning issued as snow and freezing conditions forecast 14:00
Belmullet GP with Covid-19 speaks of ‘fear and dread’ in community as cases surge 13:17
Covid-19: Current travel rules ‘will not stop’ all cases coming into State – Glynn 13:14