Alan Cawley: Parents had got barring order against their son 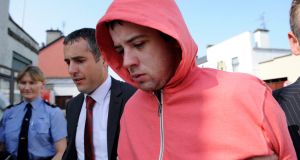 Maureen and Michael Lacey had no reason to doubt when they met Alan Cawley in a pub in Castlebar, Co Mayo, on July 10th, 2013, that he was, as he had quickly told them, a junior doctor in the local hospital.

He was so convincing that they told him about a number of ailments they both had. Indeed, Michael Lacey bought him a pint when Cawley made a telephone call to book him in for a hospital appointment the following morning.

However, Maureen Lacey quickly realised that “there was something wrong with Alan” after Cawley told her out of earshot of her husband that her life was in danger unless she had her husband committed with the help of gardaí.

They pleaded with him to leave them alone. A bar manager in the Irish House became involved and Cawley told her that he would be the doctor carrying out the autopsies on any bodies found that night.

Maureen Lacey was genuinely worried and planned to report him to the Health Service Executive the following morning. She looked into his eyes, but could not tell if he was on drugs. All she knew was that he was “acting crazy”.

He was asked to leave, and did so. Later, he wandered the streets and was captured on CCTV passing Rocky’s, a pub near where Thomas Blaine and his brother, Jack Blaine, lived on New Antrim Street.

It was a few minutes to midnight. Jack was on one of his several trips of the night to the pub. He did not speak, but staff were used to seeing him arrive with his empty Christmas mug.

The Blaine brothers were well-known, and pitied. Tom suffered from schizophrenia. His brother had dementia, a tremor and a severe hunch in his back, following a building site accident years before. Both had speech impediments.

Even on a busy Saturday night, staff in Rocky’s would make Jack a cup of tea and bring it across the street for him. The CCTV cameras showed Cawley looking into the pub as he passed by.

The barman left the mug of tea on the windowsill for Jack, following behind, hunched, walking with a stick. Cawley saw his opportunity, backtracked and approached the 76-year-old.

The barman thought Cawley was helping him across the street. The grainy footage continues showing Cawley entering the home, with the partially blind, partially deaf and almost mute Jack Blaine following behind.

Cawley admitted afterwards that he had pretended to be a nurse and had offered to check Jack’s medication. He left Jack downstairs and went upstairs, where he ransacked his bedroom.

Later, he told a psychiatrist that the petrified Blaine was having sexual thoughts, claiming that the elderly man appeared to be massaging his genital area and locking on to Cawley’s body.

“I thought I was tired of men always looking for the same thing,” he said. Cawley, the trial later heard, claimed to have worked as a prostitute. He had made a number of rape allegations against men. None of them led to a prosecution.

Some of the symptoms of Cawley’s various disorders were disturbed sexual preference and heightened sexual awareness. He had described himself as 70 per cent gay.

Inside the house, Cawley punched Jack Blaine in the face. The pensioner fell to the ground. Saying he “felt bad” for three or four seconds, he picked Blaine up, but Blaine continued with the same “needy, clinging behaviour”.

“I went into the kitchen, picked up the kettle and poured it on his groin,” he said. It was hard, he said later, to imagine that the men had meant anything to anyone since they meant nothing to him.

Even now, he was unaware that Thomas Blaine was in the house. On his way to the front door, Cawley, unfortunately, saw him lying on a bed: “I don’t have any real explanation. He didn’t do anything to me,” he admitted.

Blaine spoke to him, and he spoke back: “I only remember three words but I clearly said: ‘You’re the same,’” he told gardaí. “I remember that I was still enraged. I was distorted.

“I picked up a stick to his right-hand side and started lashing out. A drop of blood landed on my face. I didn’t like that. It snapped me back into a different state.” Cawley then turned on the light, but only for a few seconds.

Despite the horrors that had taken place, it is the seconds where the bedroom light shone in the house that have remained since with Cawley: “I wish I hadn’t done that. I’ll never get that image out of my mind,” he told gardaí, sobbing.

They asked him how many times he had hit the man in the bed: “Twenty, or 25. I don’t know. That’s going to be with me now until I’m six feet under – and what if I meet them then?”

Cawley claimed Thomas Blaine was still breathing when he left. He returned to his bed and breakfast. He went to sleep. Waking up, he saw blood on his clothes. He brought them to a field and burned them.

Having done so, he went back to his Newport Road B&B and attended a Bible meeting with his landlady, Clodagh Peyton, who had agreed to host him after his release a few days earlier from Castlerea Prison. All seemed calm, she later said.

Speaking during Cawley’s trial, Dr Alan McGee of Forensic Science Ireland said he had found Thomas Blaine’s body lying face up on the floor, with his legs on a heavily bloodstained bed.

There were pools of blood everywhere: on the room’s four walls, airborne spatters on the ceiling: “The pattern of blood staining in the room indicated that he was assaulted while he was on the bed,” he testified.

Jack Blaine was found face up in the back yard. There was a rusted shovel-head next to his head, with a black walking stick and a heavily bloodstained wooden handle beside his body.

A nearby bin was spattered with blood, so too was a wall: “The pattern of blood-staining in the backyard indicates that Jack Blaine was assaulted as he lay on the ground,” McGee explained to the court..

When Cawley (26) was charged with a double murder he apologised for all the torture he had put everyone through, most especially his family.

Born into a loving family, Cawley’s relations with them had broken, so much so that he had not been allowed to contact them on his release from a jail term in Castlerea for criminal damage four days before the killings.

Then he was told he was allowed to contact his parents only through a liaison officer, such was the distress he and his psychiatric difficulties had caused the family over the previous quarter century.

Cawley was born with a slightly large brain following a long labour. He was immediately assessed by doctors. His parents were told that he was fine. All was well until he was between four and six months old.

Then, he no longer wanted to be held. By the time he was two, his violent temper tantrums and intolerance were so bad that they took him to see a psychologist. By five, he was controlling the home environment.

Already, he was setting fires alight. Later, he began to steal beer and cigarettes. By 10 he was diagnosed with conduct disorder, on the back of complaints from neighbours about his cruelty towards animals.

He had to change school in third and sixth class because his teachers could not control him. When he was 11, he was admitted as an emergency case to a psychiatric hospital. He spent six months there.

It was the first of many periods in such hospitals. He was diagnosed with attention deficit hyperactivity disorder and was put on strong medication. Soon, he was addicted to alcohol and tablets.

His addiction decided his next course of action. He pursued a veterinary nursing course. Quickly, however, he began stealing pethidine from the veterinary surgery where he was gaining work experience, and injected himself.

His violence at home became so bad his parents got a barring order against him. But they rented accommodation for him elsewhere, with his father dividing his time between the two homes.

Having spent much of his adult life on tranquillisers, Cawley did not have drugs on him when he was released from Castlerea. However, he had €300, which he quickly spent on alcohol and other substances.

Whether or not he was under the influence of anything in the hours before the killings was in dispute at his trial. He told gardaí that he was, but the various people he met that night had not thought so.

Cawley’s parents, Frank and Noelle, sat in a corner of the courtroom through every moment of the trial, with his mother weeping as witnesses told of the efforts she had made to get help for her son from when he was a toddler.