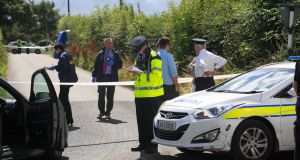 Members of the gardai following the discovery of a body at Ballyboughal, Co Dublin. Photograph: Gareth Chaney Collins 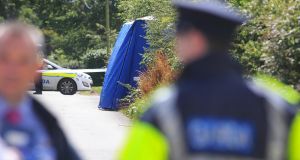 Members of the gardai following the discovery of a body at Ballyboughal, Co. Dublin. Photograph: Gareth Chaney Collins 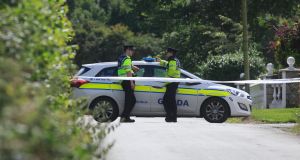 Members of the gardai following the discovery of a body at Ballyboughal, Co. Dublin Photograph: Gareth Chaney Collins

A man whose body was found on a country lane in north Co Dublin on Friday morning was murdered elsewhere, gardaí believe.

The man, who investigators believe was in his thirties, was stabbed multiple times at some stage in the last week. The death is not believed to be gang related.

The body was found on Friday mid-morning by a man using the narrow lane way off the main road. The remains were located beside farmland about a kilometer outside Ballyboughal on the Oldtown Road near the Naul.

Gardaí announced on Friday afternoon that the investigation has now been upgraded to a murder inquiry.

“He was lying here this morning in circumstances where his death was very clearly suspicious,” Supt Noel Carolan of Balbriggan Garda Station said.

The Forensic State Pathologist Marie Cassidy was at the scene along with the Garda Technical Bureau and members of the armed response unit. The body has been removed from the scene and a postmortem examination will take place later today.

An incident room has been set up at Balbriggan Garda station and national units are being made available to local gardaí to aid with the investigation.

Supt Carolan said the body may have been left on the laneway overnight or over the last few days. He appealed to anyone who may have seen something suspicious in the area to come forward.

“Anyone here over the last day or two who saw any suspicious movements or vehicles or people in the area.”

He also asked locals to report any events in the area which could be connected to the death such as an argument or fight.

Gardaí are also appealing for family, friends or workmates of the man to come forward and help them establish his identity and when he was last seen.

Supt Carolan said he wanted to assure the man’s family that every effort will be made to investigate the death.

“It’s important that we remember at times like this that there are families behind all victims of serious injury.”

“We are trying to identify who this man is. We are appealing for any family, colleagues or workmates to come forward and let us know when they last saw him or what led to him being here.

Gardaí have some clues to identity as to the man’s identity but are still not certain. There have been no reports of anyone going missing locally in recent days.

Gardaí are also asking for people who may have been on the Ballyboughal to Oldtown Road, the R129, who did not see anything to come forward. This will help narrow down when the body was left there, Supt Carolan said.

Anyone with any information is asked to contact Balbriggan Garda station on 01-8020510.