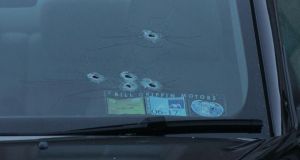 Gardaí investigating the shooting of a man in Co Meath on Thursday evening are examining a firearm found in the getaway car a short distance away.

The victim, whom the Garda said was an innocent man, is seriously injured in hospital after being shot two or three times. He was hurt in the arm, abdomen and chest; one of the bullets is understood to have passed close to his heart.

Supt Jim Cannon, who confirmed that the attack is being treated as attempted murder, said the Garda do not believe it is related to any gangs or to an existing feud.

Gardaí found the victim in his car outside a house on Mill Close in Stamullen shortly after 7pm. He had been shot after pulling into the driveway. He was brought by ambulance to Our Lady of Lourdes Hospital, in Drogheda, before being transferred to Dublin for further treatment.

The Garda has appealed for information about the gunman’s car, a blue Seat Leon estate that left in the direction of Stamullen village and was later found on the Bellewstown road out of Stamullen.

Gardaí are trying to establish if the victim was followed; they have appealed for information about the car’s movements from 6.30pm until after the shooting, at about 7.10pm. The vehicle had two occupants, the driver and the gunman. The gunman was wearing a balaclava and dark overalls.

Supt Cannon said an attempt was later made to burn the car, which had fake 151 DL registration plates. He added that there may be a connection to a white BMW, although “we are not sure about that at this stage. We would ask anybody who has any information about the movements of those vehicles to call us,” he said.

“It is very clear the gunman had no regard to the safety of residents of the area. It is an easy thing to target an innocent man when he is getting out of his car and just to fire shots, which endangers the public.” Children were at the scene, he said, and others live nearby.

Witnesses to the shooting or anybody who knows anything about it can contact Ashbourne Garda station on 01-8010600.

The Independent councillor for Laytown, Sharon Keogan, said it was a terrible, shocking incident, and the Fianna Fáil TD for Meath East, Thomas Byrne, tweeted: “Outrageous and disgusting to carry out a shooting anywhere – but in a suburban housing estate teeming with kids – it’s subhuman.”