‘If someone can buy three packets of cigarettes for the price of one, why would they buy from me?’

Revenue and Garda seize illegal cigarettes worth more than €210,000 after raids in Dublin 7 and 9 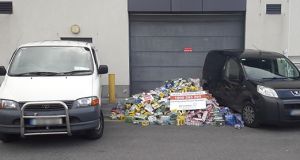 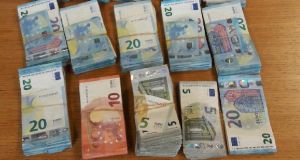 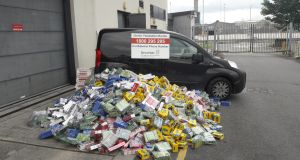 The trade in illegal tobacco is having a “devastating effect” on small shops, a retailers’ organisation has claimed.

Benny Gilsenan, a spokesman for Retailers Against Smuggling, said: “It’s having a devastating effect on small shops. They cannot compete.

“If someone can buy three packets of cigarettes for the price of one that I’m selling, why would they buy from me?”

Mr Gilsenan, owner of Benny’s XL Stop and Shop on Dublin’s Emmet Street, said the trade in illegal cigarettes has affected sales of other products - such as water , crisps and chocolates - as customers are “bypassing” his shop.

When retailers were allowed to sell 12.5 grams of tobacco per packet, Mr Gilsenan said he sold 150 packets a week.

But now that all tobacco packets are required to be sold at 30 grams each, Mr Gilsenan’s sales have fallen to 15 packets a week.

“This indicates to me and to everyone else that people are still buying their tobacco,” he said. “They’re not buying it in retail outlets though; they’re buying it from smugglers.”

Mr Gilsenan said he is forced to sell a packet of tobacco at almost €15, while illicit tobacco is sold at “anything from €4.50 to €6”.

“A third of my overall cigarette sales has gone into the hand of criminals,” he added.

His comments come following the seizure of illegal tobacco worth over €210,000 on Wednesday night by Revenue and Garda officers. A total of 230,000 cigarettes and 160 kilograms of tobacco were found at different locations in the Dublin 7 and 9 areas.

The search was part of an operation targeting a major Dublin network, and the retail value of the contraband represents a potential loss of more than €168,000 to the Exchequer.

A man (38) from Dublin was among a number of people interviewed, and documentation, electronic equipment, mobile phones and two vehicles were seized.

A file will be sent to the Office of the Director of Public Prosecutions.

Mr Gilsenan said he does not think the decline in tobacco and cigarette sales is caused by more people quitting smoking: “If you want people to quit, you can’t have an anomaly.”

He believes increasing taxation on tobacco products will not solve the issue: “It will just fuel the smugglers.”

“Every single time the Government makes it more expensive and more difficult to access cigarettes, smoking rates goes down,” she said. “And the only reason that’s not happening any more is because of lobbying from the tobacco industry.”

Ms Ryan said tobacco companies are putting pressure on politicians to reduce the price of cigarettes, because the companies cite the increasing price of tobacco products as the reason they are “sought in the black market”.

If smoking rates are to continue to decline, the influence of the tobacco industry needs to be taken away, she said.

“The increase in tax is there for health reasons, but if you make things too expensive people will look for alternatives, especially people from lower income backgrounds,” he said.

“You just have to walk down Moore Street to see the open selling of illegal tobacco,” said Mr Costello.

“We’ve seen the effect of good, concentrated policing in the north inner city, but that needs to be increased tenfold to stamp out the black market,” he said.

“Unless An Garda Síochána has the resources to deal with the trade of illegal tobacco on the black market, there’s no point in increasing the tax,” he added.

Ms Ryan believes “nobody should be making money off tobacco, whether it’s a local shopkeeper or a criminal gang . . . off something that is taking people’s lives on a daily basis in Ireland”.