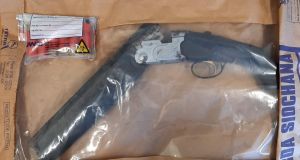 The sawn-ff shotgun and cartridges seized by gardaí in Balbriggan.

Gardaí arrested two men and seized a gun following a chase in Balbriggan on Friday evening.

At about 6pm on Friday, gardaí attempted to stop a vehicle in the Pinewood area of Balbriggan, Co Dublin, as part of An Garda Síochána’s Drogheda Operation Stratus.

The driver of the vehicle reversed away from the gardaí at high speed. He and another man then abandoned the vehicle and fled on foot.

Gardaí chased the two men and found them in shrubs near Castleland Park View, Balbriggan.

The vehicle was seized and, during a technical examination, a sawn-off Beretta shotgun and six shotgun cartridges were recovered.

These seized items will be sent to the Garda Ballistics Unit for analysis.

The two men (aged in their 20s and 30s) were detained at Swords and Balbriggan Garda Stations under the provisions of the Offences Against the State Act.