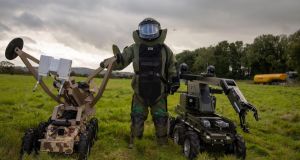 A suspicious object discovered in Galway city was deemed to be a viable explosive device by an Army bomb disposal team. File photograph: Defence Forces/Facebook

A suspicious object discovered in Galway city on Friday night has been removed for destruction after it was deemed to be a viable explosive device by an Army bomb disposal team.

Gardaí received reports of the item in the Knocknacarra area of Galway city at about 7pm on Friday, September 18th, and called on the Army’s bomb disposal team to attend the scene.

A Defence Forces spokesman confirmed that the team arrived at the scene at about 10pm that night and cordoned off the area while the situation was investigated. The device was identified, made safe and removed from the area, said the spokesman. It was taken to a Defence Forces location for further examination by the team, who left the scene shortly after 10.35pm.

A Garda spokesman confirmed the device was not located on the grounds of a school or educational premises and was removed for analysis and destruction. Gardaí did not respond to a request regarding whether the device was an old war munition or a more modern explosive.

Investigations into the discovery are ongoing.

Members of the public are advised to contact gardaí if they encounter any suspicious item or hazardous substance and to maintain a safe distance from such objects.