Public demonstration rules may be considered after anti-mask protest 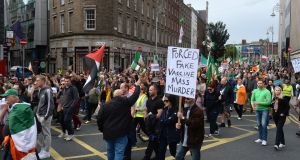 The Government will consider rules governing public demonstrations following a controversial anti-mask protest in Dublin at the weekend, Minister for Foreign Affairs Simon Coveney has said.

“There’s always a balance that the State has to manage between giving people the right to protest and be heard and to demonstrate and at the same time ensure that law and order is respected,” he said.

Tougher action by the gardaí would have led to “police state” charges, he said. “This is a difficult balancing act. I have to say that the people who were involved in that protest do not represent a majority view.

“In fact they represent a very, very small minority view,” he said, adding that it was “very unwelcome that people are foolhardy enough to think that they can ignore all of the public health advice” that has been given over months.

“They’re ignoring all of that because they see conspiracies in everything, and they just demand the freedom to walk around without restrictions – that is a tiny minority view,” he added.

People will have been “infuriated” by images from Saturday’s protest, he said. “We need to be able to get the balance right between allowing that and also protecting broader public health.”

Meanwhile, security barriers were erected around Leinster House ahead of an “Evict Them from the Dáil” protest that has been mooted on social media in recent days, alleging that the Government is “unelected”.

“This protest is not a right-wing, fascist protest and its not about mandatory masks, vaccines, testing, Bill Gates, 5G or other conspiracies doing the rounds – there are other groups protesting these issues,” the organisers stated.

Taxi drivers will hold a separate protest in Merrion Square. They will gather at 10am at the gates of the Phoenix Park and then drive through the city centre to Government Buildings.