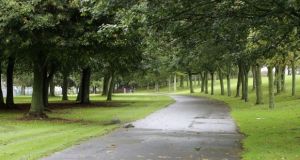 A 15 year-old boy was assaulted and injured during an apparently racially motivated attack in a Dublin park on Monday.

The boy was attacked by three young men in the Eamonn Ceannt Park in Crumlin at lunchtime while with his friends.

It is understood the boy received a number of blows to the face during the attack and was taken to Our Lady’s Children’s Hospital in Crumlin for treatment for non-life threatening injuries.

One of his friends, a 14 year-old boy, was also assaulted when he tried to intervene.

The attackers left the park on foot. One of the men was reported to be wearing a black jacket while the other two were reported as wearing a dark grey jacket and a blue jacket.

No arrests have been made.

Gardaí at Sundrive Road Garda station have appealed for any witnesses, anyone in the park between noon and 12.30pm on Monday, or anyone with camera footage to come forward.