Two charged after €80,000 worth of cannabis seized in Co Mayo 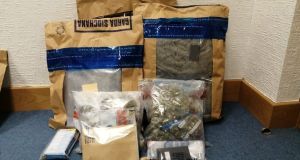 Cannabis seized by gardaí in a house in Ballina. Photograph: An Garda Síochána Facebook page

Two people have been charged following the seizure of an estimated €80,000 worth of cannabis in Co Mayo.

The man, in his 50s, and woman, in her 20s, were arrested following a Garda search of a residence in Ballina on Friday where the cannabis was seized along with €3,500 in cash.

They were detained under the provisions of section two of the Criminal Justice (Drug Trafficking) Act, 1996 at Ballina Garda station.

The pair will appear before Ballina District Court on March 9th.