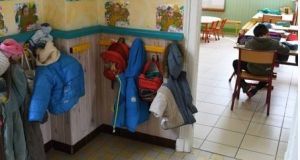 Under proposals for reopening schools, Leaving Certificate students, junior and senior infants and fifth-year students would be the first classes to return from March 1st. Photograph: Getty images

Schools will begin their phased reopening from the start of March but Level 5 Covid-19 restrictions will remain in place at least until April under the Government’s latest plan for dealing with the Covid-19 pandemic.

The Cabinet Covid-19 committee met on Thursday evening where Ministers were updated by the National Public Health Emergency Team (Nphet), the HSE and the vaccine taskforce.

Sources said that Level 5 restrictions would remain in place “for at least the next number of weeks and likely beyond that”.

In primary schools, junior infants to second class are scheduled to reopen under the first phase, and third class to sixth class in the second phase a few weeks later.

At secondary level, sixth year students are set to return first, followed by third year and fifth year students a few weeks later and the rest possibly to return in April under the plans, which will go for Cabinet approval next week.

A mooted re-opening of construction is unlikely to be supported by Nphet while hopes that outdoor sports could resume and that people could meet outdoors have also been dashed.

One senior source said it was now “out of the question” that restrictions would be eased to allow people to meet outdoors.

Nphet was “very, very cautious in their presentation”, it is understood with sources saying that the phased reopening of schools was “about the limit of what they can support”.

Sources also said that there was agreement in principle to extend the Pandemic Unemployment Payment (PUP) and Employment Wage Subsidy Scheme (EWSS) into the summer.

Minister for Public Expenditure Michael McGrath has been tasked with assessing the costs. Both schemes are currently only in place until the end of March.

It is understood that Ministers pushed Nphet on how much longer Level 5 measures might be needed and although a date was not given, Government sources now believe that this level of restrictions will be needed “for the foreseeable future”, into March and beyond.

A presentation was also given by the vaccine taskforce which was described as “hopeful”.

Ministers were told that in the second quarter there would between 1.2m-1.3m doses given a month.

Government officials will continue to work on a refreshed version of the Living with Covid-19 plan before another meeting next Monday. Sources have cautioned that it will not contain dates for reopening of the economy and society.

There was concern expressed at the meeting that daily cases of Covid-19 were still too high and not falling fast enough.

A source pointed out that the number of people in intensive care units was also still too high, and was considerably lower when restrictions were eased after the first wave of the virus.

The plan is to be reassessed as the vaccination rollout continues.

Another source said that the Government would be “very cautious about setting targets or triggers” in terms of when certain sectors of society will reopen saying each “will be assessed on its own merits”.

Nphet is preparing a paper to submit to Government as part of the deliberations on revising the Living with Covid-19 plan.

Dr Glynn was asked about Nphet’s input at the regular department press conference after the meeting.

He said: “We’ve been looking at the lessons learned, areas that need additional focus and that perhaps can be improved upon over the coming months in light of our recent and longer-term experience now of this disease”.

“We have developed a paper based on those views.”

A Government source suggested these remarks were code for easing restrictions “very slowly”.

Under the Cabinet proposals for reopening schools, Leaving Certificate students, junior and senior infants and fifth-year students would be the first classes to return from March 1st.

It is understood a public health review will be carried out every two or three weeks before other classes are potentially allowed back, meaning some classes may not return until April.

Earlier, Tánaiste Leo Varadkar said it would be irresponsible to use the words “certainty” and “guarantee” in relation to school re-opening dates and that was why Nphet’s informal advice to Government was for a phased re-opening of schools.

He was responding to Labour leader Alan Kelly who hit out at Government Ministers “kite flying” about dates for schools to re-open.

This could “torpedo” plans for the phased re-opening from March 1st unless it had been “Tony Holohan- and Nphet-proofed”.

Mr Kelly said students, parents and teachers were looking for clarity on school reopening but already this year there had been three announcements about school re-opening that had to be withdrawn – on January 7th, 26th and earlier this week before the Cabinet met.

The Tipperary called on the Tánaiste to guarantee that once a decision was made by the Cabinet sub-committee that there would be no changes.

Mr Varadkar said it would not be “responsible for me to use the words ‘certainty’ and ‘guarantee’”.

He said Covid-19 case numbers were going down but are still quite high at 500-700 per day. “Schools were fully open at those levels back in September and October but we now have the B117 variant, which is much more transmissible.

“We just can’t say for sure what impact it will have as schools reopen on a phased basis throughout March and April.”

That was why scientists and public health doctors recommended bringing back students gradually with “some years going back first, followed by an assessment after two or three weeks,”Mr Varadkar said.

“It’s only then that the green light would be given for more classes or years to go back.”