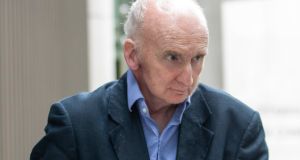 There were rumours “swirling around Terenure College” about former teacher and rugby coach John McClean as far back as the 1970s, one of his former pupils has said.

McClean (76) was sentenced to eight years in prison on Thursday over the sexual abuse of 23 boys in the south Dublin school, in incidents between 1973 and 1990.

John Kenny, RTÉ sports commentator and radio DJ, was taught English by McClean for two years in the late 1970s.

Mr Kenny said he remembered an air of suspicion surrounding McClean as a pupil. “The rumours were there. It’s good that justice has been served, not before time. This has been swirling around for a long time,” he told The Irish Times.

Mr Kenny said McClean taught English and was known to set up a lot of school plays, often Shakespeare dramas. “He’d get the fifth and sixth years to put on a play, whichever one was on the Leaving Cert that year,” he said.

During the court case it emerged McClean had used costume fittings for the plays as an opportunity to sexually abuse multiple pupils.

After a student reported McClean had touched his genitals he was removed from his role fitting costumes in 1979. However, in the early 1980s he was given his own office as first-year “form master”, where he would continue to physically and sexually abuse students.

McClean, who had been a prominent coach of schoolboy rugby at both Leinster and Ireland level, left Terenure College in 1996 after the father of one boy reported the abuse.

It is understood McClean’s sentencing on Thursday has led to a number of further calls being made to Terenure Garda Station about him.

The Garda investigation into the former teacher is ongoing, with gardaí to follow up on the recent contacts to ascertain if any relate to further crimes.

Sentencing McClean in the Dublin Circuit Criminal Court, Judge Pauline Codd said he had exploited his position as a teacher and coach in an “egregious breach of trust”.

In a statement, the Irish Rugby Football Union (IRFU) said it wished to commend the victims “who found the strength to seek justice” in the criminal case. “This case has shocked us all and we hope that this can bring these men some closure,” it said.

Terenure College and the Carmelite order who run the school are facing seven civil lawsuits from abuse survivors seeking compensation, with that number expected to increase.

“I have a lot of sympathy for the vulnerable lads that got caught, I’m lucky it didn’t happen to me,” Mr Kenny said.

There were “a lot of similarities” between Gibney and McClean, he said.

“These people get into positions of power, and they prop themselves up by helping the people around them,” using their reputation to deflect allegations, he said.