The Northern Ireland protocol: ‘All shades of unionist are really angry’ 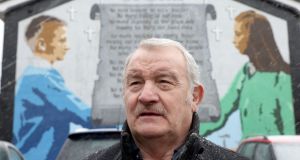 Jim Wilson has seen tension on the streets of Belfast for much of his life. Today, he uses the image of the boiling kettle to describe the atmosphere in loyalist areas: “It’s simmering and simmering.”

“And then it’ll start to come to the boil. A lot of us are trying to calm it down ... but the frustration in our communities, it is really serious. People are trying to keep a lid on it.”

A former member of the loyalist paramilitary group, the Red Hand Commandos, Wilson is now a community worker in east Belfast trying to calm tensions caused by the controversy over the Northern Ireland protocol.

“The very last engagement we want in our communities is violence of any description,” says Wilson; the only thing the flags protests of 2012-13 achieved was to give over 300 kids criminal records, he emphasises.

'One minute the vote for Brexit was a UK-wide thing, but now what they’ve said is the UK voted to leave but Northern Ireland, you have to stay a wee bit there'

“Violence has hurt us in the past and it’ll hurt us in the future and we don’t want violence,” he goes on. But his declaration, speaking to The Irish Times, comes with a caveat.

“I’m not saying violence is totally out the window. We’re a bit long in the tooth, there are younger lads coming through ... they’ll push us aside and say, ‘Well, it doesn’t matter what you say’.”

Graffiti voicing opposition to the Irish Sea Border and the Northern Ireland protocol – which loyalists oppose because it places a customs and regulatory border between the North and the rest of the UK – first appeared in January, and has mushroomed since the controversy over the European Commission’s hastily aborted plan to trigger article 16 and the temporary withdrawal of some staff at Belfast and Larne ports amid concerns for their safety.

The Police Service of Northern Ireland (PSNI) subsequently said these threats were not credible, with both the police and loyalist sources attributing them to individuals or small groups, not loyalist paramilitary organisations.

However, the concern now is that the further tensions are raised, particularly among the younger generation, the more difficult the situation might be to control.

“It just seems to be taking and taking and taking of the unionist community,” says Wilson. “[The Protocol] is probably the biggest kick in the teeth we have had from the government in the United Kingdom in a long, long while.”

“One minute the vote for Brexit was a UK-wide thing, but now what they’ve said is the UK voted to leave but Northern Ireland, you have to stay a wee bit there [in the EU],” says Jim, a north Belfast community worker who works mainly with young people in the Tiger’s Bay area.

He is the only one of a number of community workers from loyalist areas in Belfast and north Down who would be fully identified talking The Irish Times because of the past abuse they have received on social media.

All express concerns about the tempers they are seeing in their communities . Some of it is down to the Protocol, but there are wider frustrations, too, all helping to increase tensions.

There is the sense that unionism is treated with a 'lack of respect' by nationalist politicians, and by those in the Republic

For example, there is frustration and anger over how loyalists are portrayed by the media, as well as successive incidents within their own communities that have fuelled disillusionment and resentment.

They list these as including unfounded claims made about loyalist communities in north Belfast following the disappearance and death of schoolboy Noah Donohoe in June.

Then, there is a Belfast City Council motion that clears the way for a minority of people in a community to ask for the erection of Irish language street signs.

Then, there was the unhappiness caused internally when Crusaders FC – a north Belfast club with a strong tradition in loyalist areas – backed calls for an all-island league.

Finally, and this appears often in conversations with loyalists, there is the sense that unionism is treated with a “lack of respect” by nationalist politicians, and by those in the Republic.

Such factors are symptomatic, they argue, of the extent to which their identity is being undermined. “People are now just collectively demonising everything about being British in Northern Ireland, and it’s working,” says Jim.

Brexit has brought a united Ireland forward, “there’s no doubt about it,” says Martin, from the Shankill area of west Belfast. “Somewhere along the line there will be a big, major discussion on a united Ireland

“It’s inevitable, but the way it’s being done at the moment, it’s getting forced down your throat without your opinion or how you feel about it,” he tells The Irish Times.

Of the protocol, he says, “we’re saying clearly in unionist communities it won’t work because we don’t want it to work. It’s aggressive, it’s offensive, it totally demeans our situation in our own state, and nobody seems to care.”

Unionist parties have called for the protocol to be scrapped, expressing concern not just about the constitutional implications but also the impact on businesses and the availability of goods in the North since it came into effect.

A DUP online petition calling on the UK government to trigger Article 16 to secure “unfettered” trade from Great Britain to Northern Ireland, has attracted more than 142,000 signatures. It will be be debated in Westminster on Monday.

Last week Reach UK, an east Belfast community organisation which represents former loyalist paramilitaries, called for “calm and rational” engagement to lower tensions and solve issues related to the protocol; Wilson points out that so far, “the leaders of loyalism have been very, very quiet”.

“This is in the hands of politicians, and if the politicians don’t sort it and fix it then that’s where you run the risk ... that then loyalism might look at it in different ways.”

On the streets, “what I’m hearing from young and old, people are talking silly stuff about violence,” says Jim. “These are people who I never would have thought would have talked that way, so you’re not talking loyalists here but all shades of unionism from top to bottom. They’re really angry.”

He puts it down to “windbagging” rather than a serious call for violence. Nevertheless, he emphasises that he and others present lived through the Troubles and “it’s probably those who didn’t engage in violence are shouting it the loudest, but they’re still shouting it and young people listen to that.”

“You stand at the market on a Saturday and you hear someone saying they can’t get the fish from Scotland, and then that ripples around, and that’s where you hear the talk, ‘Oh, we should do this, why don’t the boys get out’, and that’s where it gets dangerous,” says David, a community worker in Ards and north Down. “Somebody will listen to that and think that’s what people want.”

“It’s a catalogue of things and it’s just building and building and all it takes is one kid pointed in the wrong direction and you’ll have kids going to jail again,” says Martin.

His concern is for the summer ahead, and the marching season; he explains that young people now begin collecting wood for the bonfires – traditionally lit in loyalist areas on the eve of July 12th – as early as March or April.

“You know what there is an appetite for? A long, long summer,” he says. “See when the kids start building for bonfires here, and you then have councils going in and moving them ... they feel that everything they do as far as tradition round bonfires is getting taken away year by year, bit by bit.

“That’s going to fuel an awful lot of violence from young lads whom people can’t stop over the summer months.”