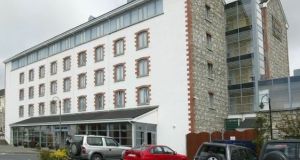 They were a chance for sitting politicians to kick back away from the cut and thrust of battle in Leinster House and a way for retired TDs and senators to stay in touch with old friends.

But previous meet-ups did not take place against the backdrop of a global pandemic and tough restrictions on numbers at funerals and weddings.

Six months on from the golf dinner at the Station House Hotel in Clifden, Co Galway on August 19th, the event continues to cast a shadow over those who were there.

Eighty-one people attended the event and a room divider split the space in two but it took place at a time when Covid-19 restrictions limited indoor gatherings to 50 people.

News of the dinner prompted claims that it breached either the letter or spirit of the law and whipped up public anger at the attendees.

The Garda investigated the event and the storm clouds are back as two politicians – Independent TD Noel Grealish, captain of the Oireachtas Golf Society, and former TD and senator Donie Cassidy, president of the society – are to face charges over alleged breaches of Covid-19 regulations.

Two other people facing charges are understood to be based in Galway and helped the Oireachtas society organise the dinner.

The argument over whether or not Covid-19 regulations were breached will play out in the District Court later this year.

Mr Cassidy last year apologised “unreservedly” on behalf of the society, and said “it was not our intention to disregard Government or health authorities’ advice”. This week he said he had not yet received the court summons but said he would be mounting a vigorous defence. Mr Grealish did not respond to requests for comment.

Regardless of the outcome of the future court proceedings, there have been lasting repercussions for those who attended the dinner.

Then minister for agriculture Dara Calleary resigned his position, as did European commissioner Phil Hogan.

Former attorney general Séamus Woulfe was also there and he was embroiled in the controversy at the beginning of his new role as a judge of the Supreme Court, to which he had been appointed in July.

Six Senators – three from Fianna Fáil and three from Fine Gael – lost their respective party whips for almost five months due to their attendance.

The Irish Times understands that none of those who attended the dinner were ever under Garda investigation, except for the organisers.

One political attendee, speaking on the basis of anonymity, said the last six months have been “bloody hard”.

People still make comments that can “cut deep” and the online backlash has been “crazy”, he said.

Perhaps less seriously “smart alecs” continue to make jibes like asking the politician “how’re you fixed for a game of golf?”.

He noted that Irish people who booked dental appointments in Tenerife as a cover for going on holidays get coverage in the media but it’s “gone the next day”. He said he appreciates that politicians are public figures but the long-lasting focus on “Golfgate” in comparison is “frustrating”.

He said he regrets going and added: “I swear I walked into that room not realising what was going to happen . . . As far as I was concerned everything had been done to meet the rules as they stood.”

Also speaking anonymously, a different political figure who was there predicted there could be further six months of attention on Golfgate depending on when the court proceedings take place.

Fianna Fáil Senator Niall Blaney said he had gone to the event in August to “switch off for a couple of days”. He said: “I didn’t go there in any way to cause upset and I realise it caused an awful lot of upset.”

He said he apologised at the time and “I’m sorry about the whole event”. Mr Blaney said he has been on the receiving end of online abuse, but added: “people have been suffering a lot more than I have and I’m in no position to complain about it”.

Mayo TD Mr Calleary was the first to resign over the Golfgate affair.

On Friday, he said that if he could “wind back the clock” he would not have attended the dinner, adding: “I made a stupid, stupid mistake”.

He told RTÉ Radio One he knew early on he needed to resign.

Mr Calleary, who, incidentally, does not play golf, said he was there to offer tribute to the late former TD and MEP Mark Killilea. Several members of the Killilea family attended the dinner, which honoured Mr Killilea.

Mr Calleary was asked what it was like to be a “lightning rod” in the aftermath of the dinner, and he replied: “It was incredibly difficult. I never tried to hurt people . . . or anger people”. He also said: “What I went though in those days is nothing compared to where so many people are in terms of Covid.”

Mr Calleary said he did not know if he will ever be a minister again but he would “love to be” and retains that ambition.

The length of time the fallout from Golfgate persists will have a bearing on whether or not that ever happens.