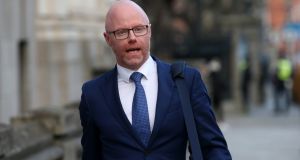 There was an unintended but much-needed moment of light relief from Stephen Donnelly at the Fianna Fáil parliamentary party (these online gathering go on for hours) when he was fielding questions from colleagues on the vaccine rollout.

He didn’t reply, as a few sniggers came over the ether from those participants who forgot to mute their audio. But here’s an idea: maybe Stephen could have a quiet word with Dr Leo Varadkar, who used to be very pally with the former President of the National Association of General Practitioners (NAGP) until revelations about a leaked document meant he regretfully had to chuck Dr Maitiú Ó Tuathail under a bus.

Well at least Stephen Donnelly has the good manners not to wear his underpants over his trousers, which is something. Although how the Minister for Health manages to change into his Superman outfit now that phone boxes are gone is a mystery.

Donnelly, who political correspondents complain is very hard to pin down and is not the most accessible of ministers when it comes to giving interviews, did an “exclusive and wide-ranging interview” with the Sligo Champion’s Esther Hayden this week in which he confided his belief that “the vaccine offers the best chance of tackling Covid”.

In the course of a two-page spread, he discussed “life and Covid-19” and tells of how he wanted the big job in health but didn’t think he’d get it. “In fact, I had not expectation of any job. I was just glad to see Micheál Martin as Taoiseach,” said the man of whom it used to be said that he defected from the Social Democrats on the promise of a cabinet job from the Fianna Fáil leader.

Is ASTI the new Banksy? On Friday, an eagle eyed art-lover spotted what he thinks might be an original ASTI piece adorning a lamppost near the home of Taoiseach Micheál Martin.

McGreehan is described as 'Senator for Louth', which is not the case as Senators do not represent constituencies

The identity of the artist is shrouded in mystery but experts say the black marker on white card poster with distinctive 3D capping is an excellent example of the “Disgruntled Muinteor” movement of which ASTI is a leading light. The word in Cork South Central is that the naïve deconstructivist collage montage synthesises unresolved pedagogical rage with a trans-pandemic intensity given its fullest expression in the never-less-than-uncompromising hard line approach of the artist.

However, a dispute has arisen over whether “D is for Norma” is the work of ASTI or the work of The Trots, a small but powerful collective which many claim has heavily influenced ASTI’s oeuvre. This is because the image is drawn on the reverse of an anti-water charges poster which predates the pandemic and Norma Foley’s appointment as Minister for Education.

And yet there is diversity of movements at play here with a strong Green commitment to recycling unpinning the narrative. Positioned near the Well Road/Skehard Road junction in the heart of the Taoiseach’s Cork South Central Constituency, this piece has Disgruntled Muinteoir written all over it. Hdip Hdip Hooray!

Noses slightly out of joint in Fine Gael communications circles this week when Fianna Fáil started aping their fondness for sticking up twee videos on social media of politicians acting like normal people. (No, not THAT normal people. Everyone keeps their clothes on. Apart from Richard Bruton swimming in Dublin Bay.)

“It’s Pancake Tuesday and we all need a little pick-me-up,” tweeted the official Fianna Fáil account, above a sweet video of senator Erin McGreehan making pancakes with her four young sons. “What do you put on yours?” asked the hot shots in headquarters.

Given the Soldiers of Destiny’s many online critics, the response was remarkably restrained. McGreehan is described as “Senator for Louth”, which is not the case as senators do not represent constituencies.

Wishful thinking, perhaps, on the part of Mount Street to make up for Declan Breathnach’s loss in the last election leaving Fianna Fáil without a seat in the county for the first time in its history. The king of online cooking tutorials is Fine Gael party chairman and former Minister for Communications Bruton. He didn’t enter the crowded pancake field this year but he posted a moussaka masterclass a couple of weeks ago.

An unlikely entrant in this increasingly crowded field was former Minister for Justice, Charlie Flanagan, who doesn’t have a track record when it comes to posting up photographs of culinary creations. Charlie tweeted a shot of some very artfully arranged pancakes, folded into triangles, dusted with icing sugar and interlaced with wedges of lemon. It was a stock photo. He seemed a little down in the dumps.

“Thinking of all the Pancake Tuesdays over the years I missed due to work while my girls were young. Now I’m at home and they’re gone. The stages of life! Anyway, do have as many pancakes as you like and don’t feel guilty. And while you are enjoying them let’s hope the f***ers who dropped you from cabinet chokes on theirs.” That last line isn’t true. We made it up. But then, Charlie didn’t make the pancakes.

Needless to say, Leo Varadkar got in on the pancake act too by showcasing a photo of his crepes with sugar and lemon juice and lots of lovely berries to pile on top of them.

“Last treat before the Lenten fast begins. Looking forward to an uber healthy 40 days,” he burbled. A reply zinged back within a minute from Chay Bowes, the businessman who has been a thorn in the Tánaiste’s side since late last year when he supplied the info behind Village Magazine’s revelations about the then taoiseach leaking a sensitive GP pay deal document.

Unlike Leo’s juiced-up pancakes, Chay’s missive was dripping in sarcasm. “Yummy. Of course the Lenten fast, at one time was a period of penance and reflection on sins committed. Enjoy the pancakes.”

It’ll be interesting to see where this particular vehicle goes. And why

Back in November, the Tánaiste took questions in the Dáil and apologised for leaking details of the deal reached with the IMO to Ó Tuathail, who was then head of the NAGP. He hoped he could put the embarrassment behind him after fronting up in the chamber. But neither Chay Bowes nor Web Summit organiser Paddy Cosgrave, who initially pointed Bowes in the direction of Village editor Michael Smith, are keen to let that happen.

Meanwhile, tech entrepreneur Cosgrave has morphed into a highly enthusiastic critic of the Government, the Irish political system and the professional media, firing off his anti-establishment blunderbuss in all directions on social media. Bowes and Cosgrave are politically on the same wavelength. Now they have gone into business together, which is intriguing.

Health Reform Ireland was incorporated in early January “to benefit society by promoting best practice in all aspects of health care service provision and educating the public as to the benefits of a healthcare system that delivers the best health outcomes and value for the people of Ireland”.

Documents in the Company Registration Office suggest directors Bowes and Cosgrave will not benefit financially from it. Health Reform Ireland will publish and distribute relevant information to “inform, create and enhance public awareness in Irish society about healthcare issues.” It aims to contribute to the development of healthcare policy within the EU while providing comprehensive, independent and practical information on healthcare policy, rights and entitlements in Ireland.

It wants to encourage public debate on health issues and “facilitate the exchange of ideas and experience in areas such as community development, research and education”.

The company has the power “to accept and receive any donation of property of any nature and any devise, legacy or annuity, subscription, gift, contribution or fund, including by means of payroll giving or other similar arrangements, and including (but so as not to restrict the generality of the foregoing) the holding of lotteries in accordance with the law” in order to promote its main objective.

It’ll be interesting to see where this particular vehicle goes. And why.