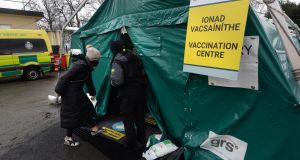 Covid-19 infections among hospital workers have fallen by 90 per cent since vaccines were rolled out to frontline staff, outpacing the rate of decline in cases among the general population, new figures show.

However, there was a blow to the State’s efforts to control the disease on Friday night, with the National Public Health Emergency Team (Nphet) announcing that a new variant of concern had been detected here.

Three cases of the P1, or Brazilian variant, all associated with recent travel from Brazil, have been identified by the Health Protection Surveillance Centre. Nphet said these cases were being followed up by public health teams and “enhanced public health measures” were being put in place in response.

Despite the development, public health officials say data suggests that vaccination is helping to suppress infection among hospital workers, with the 90 per cent decline in new cases outpacing the reduction among the wider population (down 76 per cent).

HSE chief clinical officer Dr Colm Henry said some of the “sharp drop” in cases of Covid-19 among hospital staff could be explained by falling levels of community transmission, but that “the scale and timing of the fall is encouraging and suggests an early vaccine effect”.

Hospital worker cases peaked during the post-Christmas surge at around 1,000 in the week ending January 17th, he said. “We have seen a distinct fall in cases, particularly in the last two weeks. On the week ending February 14th, it was at just under 100 cases.”

Hospital-acquired infections had fallen from a peak of 500 in the first week in January to just around 100, he said.

Data seen by The Irish Times for the preceding week, when there were fewer than 200 cases recorded, shows the largest share of cases was in the Dublin Midlands Hospital Group, arising from a persistent outbreak in St James’s Hospital.

Officials believe that precisely determining the impact of vaccinations will require work, but Taoiseach Micheál Martin said Ireland was “beginning to see a reduction in the number of healthcare workers getting Covid”.

He said health authorities suggested this was evidence vaccines were reducing mortality and illness and “that should give us more choices”. But he warned that no “large reopening of society” was imminent.

A further 28 deaths along with 763 new cases were reported on Friday.

The Government is working to revise its five-level Living with Covid-19 plan, but sources with knowledge of the process said there would not be a “radical departure”.

It will emphasise an extremely gradual reopening, with time between small steps rather than wholesale shifts between levels. No fixed dates are expected, but once schools are reopened, next steps include reopening construction, varying the 5k limit, opening non-essential retail, and outdoor dining, though this is some way off.

Government figures said there would be detail on the reopening of schools and childcare next week.

Tánaiste Leo Varadkar said the Government had received advice from the National Immunisation Advisory Committee that “will allow us to bring forward the vaccination of people under 70 who are medically vulnerable”.

A study published in the Lancet showed a single shot of the Pfizer/BioNtech vaccine was 85 per cent effective. The companies have also told US regulators it no longer needs to be kept at ultra-low temperatures.