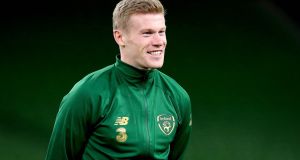 James McClean has suffered abuse for the last decade for his decision not to wear the poppy because of the events of Bloody Sunday in his native Co Derry in 1972. File photograph: Ryan Byrne/Inpho

The abuse suffered by Republic of Ireland international James McClean as a result of his refusal to wear the poppy is “inexcusable”, the Royal British Legion has said.

The legion, which has a branch in the Republic, has exclusive rights to sell the poppy to raise funds for former British servicemen, which it does every November.

In a statement the legion said it offered its “full support” to Mr McClean’s decision not to wear the poppy on his shirt.

Mr McClean has suffered abuse for the last decade for his decision not to wear the poppy because of the events of Bloody Sunday in his native Co Derry in 1972, when 13 people were shot to death by members of the British army during a civil rights march. A 14th person died later.

He has been targeted in the press and booed at grounds around England for the decision. This week Mr McClean and his wife, Erin, went public on the abuse they have suffered online.

In one instance Mr McClean received a message from an Instagram user threatening to burn down his home with his family inside. “This is from a kid,” he said. “That sort of hatred shouldn’t be in you at that age. Where is he learning that? I hope and I pray that my kids wouldn’t have that sort of hatred in them. If they did, I would do my best to educate them, to sit them down and tell them that their words have consequences.”

Erin McClean said the abuse has been going on for nine years and is affecting the couple’s two children.

Commenting on the abuse, the Royal British Legion said it in “no way condoned or endorsed this type of behaviour” and stood by Mr McClean’s right not to wear the poppy.

“At the Royal British Legion we believe that discrimination, hatred and abusive behaviour in any form have no place in our society and should not be tolerated,” it said.

“The poppy is a universal symbol that represents sacrifices made in the defence of freedom, and so the decision to wear it must be a matter of personal choice. To insist that people wear a poppy would be contrary to everything that it stands for. We offer our full support to James for exercising his right to choose not to wear a poppy.”

Taoiseach Micheál Martin and First Minister of Northern Ireland Arlene Foster are among the politicians who have spoken out against the online abuse suffered by Mr McClean.

Mr Martin praised Mr McClean and his wife for going public on the abuse they have endured as a family.

In a tweet, he said: “Well done to the family of James McClean for speaking out about years of horrific abuse they’ve suffered online. Social media at its best gives a voice to everyone – at its worst it is toxic and cruel.”

Ms Foster told the BBC that people like herself and Mr McClean who are in the public eye can become immune to online abuse, but it is different when families are affected as well.

“I stand with all of those who suffer abuse at the hands of anonymous trolls,” she said. “I have called on social media platforms to stop the anonymity of these people so they can be held accountable for some of the vile views and positions they have put on.”

“No one should fear for their safety because of their identity. Solidarity to James, Erin and the family,” she said.

“All have spoken about how they have been targeted for the colour of their skin or where they were born. Many more have chosen not to speak about their experiences,” he tweeted.

“Sport is about bringing people together. Celebrating difference while doing something we all love. Those who are engaging in these hateful actions are damaging the reputation of their clubs, their sport and Ireland.

“Actions taken by Instagram in recent weeks are welcome, but limited. They can only be part of the solution. NGBs [national governing bodies] are acting too, which is extremely welcome but they can’t do it alone. Fans need to play an active role in stamping out this hatred across sport.

“Real fans can do their part by reporting those engaging in this abuse and showing that they do not represent them. Where social media companies or admins do not act they can put pressure on them to do the right thing.”