Michael Maguire: ‘The past is not going away in Northern Ireland’ 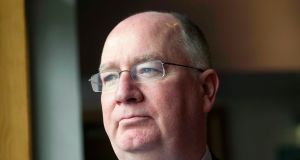 Michael Maguire: ‘The way we in Northern Ireland are dealing with the past is broken’. Photograph: Pacemaker Press

During his seven years as the Police Ombudsman for Northern Ireland Michael Maguire managed to find time to write a book. “It’s a political thriller involving corruption among businessmen, politicians and police officers,” he explains.

Is it rooted in fact? He won’t be drawn on that question in this interview, where he prefers to talk about his role as the independent, impartial investigator of complaints against the PSNI, a post from which he retired last summer.

“It’s a novel,” he stresses, a work of fiction, and one that is still waiting for a publisher.

Still, as Police Ombudsman, dealing with allegations, past and present, against police officers, navigating tricky policing and political obstacles, and fending off attempts to emasculate or limit the power of his watchdog office, he would have experienced some of the murkier aspects of Northern Ireland that would have served his fiction well.

At times the job was like “trench warfare,” he acknowledges.

Maguire is a native of south Belfast. Now 60, he grew up through the Troubles and was chief inspector of the Criminal Justice Inspectorate in Northern Ireland from 2008 to 2012. Before that, he worked in private industry in management consultancy.

He was the third Police Ombudsman in the North. The first was Nuala O’Loan, a fiercely independent official who established the standing of the office with two landmark reports: the first finding that police mishandled the investigation of the Real IRA 1998 Omagh bombing in which 29 people were killed; and the second that found there was police collusion with the Ulster Volunteer Force murder gang from Mount Vernon in north Belfast.

Her successor, the former Canadian Mountie Al Hutchinson, had an unhappy time, some of his findings upsetting families who made complaints against the police, particularly the Loughinisland families.

Here Maguire explains that because of continuing legal issues he can’t talk about the 1994 Loughinisland attack, in which six men were gunned down by the UVF while watching an Ireland vs Italy World Cup match on television. In 2016 Maguire found there was police collusion in the case, effectively overturning a key conclusion five years earlier by Al Hutchinson that there was insufficient evidence of collusion.

In 2018 the Belfast High Court rejected a claim by retired RUC officers that he exceeded his powers over the Loughinisland investigation, a decision that is being appealed. Hence Maguire’s reticence.

Equally, he can’t comment about other high-profile historic cases he had hoped to complete before retirement such as the police investigation of the UDA killings of five Catholics at Sean Graham bookmakers on the Ormeau Road in Belfast in 1992 and the “trick or treat” 1993 UDA murders of eight people at the Rising Sun bar in Greysteel, Co Derry.

Reports into these cases were due to be published in 2019 but then it emerged that additional PSNI information about the investigations was not disclosed, and the cases were put back again while this new material was considered. Maguire says it was difficult having to tell the families of the postponement.

The frustration over such cases probably explains his hesitation when asked if he enjoyed his seven years in the post. “I am not sure if ‘enjoy’ is the right word,” he finally says. “It is a job the like of which I have never done before and the like of which I will probably never do again. It carried its challenges. I think it has been rewarding as a job, and that is probably the better answer. It has been rewarding.”

Maguire, despite the hold-ups, feels he handed over the office to her in “better shape” than he got it.

Maguire, who comes from a nationalist background, had to field criticism from the PSNI rank-and-file representative body the Police Federation and from some unionist politicians. He rejects any suggestions of antipathy to the police.

He retired at the end of June at the same time as George Hamilton stood down as the PSNI chief constable. Earlier in his tenure Maguire felt forced to initiate legal action against Hamilton’s predecessor Matt Baggott over Baggott’s refusal to hand over sensitive intelligence files to Maguire’s office. That was resolved when a more co-operative Hamilton became chief constable in 2014.

Publicly Maguire and Hamilton appeared to have had quite a fraught relationship, chiefly over historic cases, although privately, Maguire says, they got on well. In June, Maguire got a CBE from Queen Elizabeth in her birthday honours list while Hamilton was knighted.

The Police Federation had no encomiums to offer Maguire. Its chairman Mark Lindsay spoke of the “strained relationship” with his office and its “biased viewpoint towards serving and retired officers”.

Maguire rejects this claim. “Everybody appreciates that the police do a very good job; there is no question about that. But they have incredible powers, powers of arrest, powers to search and the power to take someone’s life,” he says.

“As a citizen I have always felt that the role of the office is to position yourself between the police and the citizens, to be able and to have the power to ask questions of the police, to investigate them thoroughly and objectively, and to come back with the answers.

“I have always taken the position that a report that says that police have done no wrong is as important as one that criticises the police.”

Maguire challenges too the allegation propagated by some republicans that the Royal Ulster Constabulary was rotten to the core. “Some people concoct that narrative but I don’t agree with it. Not everything the RUC did was right, and there were things not even RUC officers would stand over. Clearly that is the case. That does not mean that everybody is tarred with the same brush; it clearly doesn’t.”

He feels the past is the albatross around the neck of his office and of the PSNI. “I imagine that George Hamilton would agree with this but dealing with the past has damaged relations between the police and the Police Ombudsman’s office, because of the nature of the debate,” he says.

Maguire mentions how he and his office have been accused of having an obsession with allegations of police collusion. But he points out that, of the ombudsman’s 24 historic reports, only three referred to collusion: the investigation into the aforementioned UVF Mount Vernon gang; Loughinisland; and the IRA Claudy bombings in 1972 where nine people were killed. In the Claudy case, the then ombudsman Al Hutchinson found that there was collusion in that the RUC, the British government and the Catholic Church protected a Catholic priest, Fr James Chesney, who was allegedly involved in the bombings in the Co Derry village.

Maguire feels his former office, and also the PSNI, should be dealing with the present, not the past

Maguire and Hamilton were at one in their desire to hand over historic cases to a separate body: for instance, an Historical Investigations Unit, as proposed in the December 2014 Stormont House Agreement – notwithstanding that former chief constable Hugh Orde expressed serious reservations about how effective such a unit would be.

Maguire feels his former office, and also the PSNI, should be dealing with the present, not the past. “If that were to be implemented the historic investigations would be taken from us and from the police, and allow police and the ombudsman deal with contemporary matters,” he says.

“The ones who are suffering, who are seeing the impact of this, are the families who get letters from the ombudsman saying we are not going to be able to deal with your case for another 10 years. That’s where the reality of this hits home.”

When he took over in 2012 he had 40 staff investigating 170 historic cases. Just before he retired he had fewer than 30 staff dealing with 430 historic cases on an annual budget of £2 million. “That means that families have to wait much longer for results. That can’t be right; there needs to be a better way of doing it.”

“The way we in Northern Ireland are dealing with the past is broken,” he adds.

“The past is not going to go away. There needs to be a better way on how to deal with it. I would have a serious concern: there are second and third generations families now asking, say, what happened their father or grandfather. That will continue, so we need a different way of dealing with it.

“Let not the perfect be the enemy of the good. It will never be perfect but it will be better than what we have. That means a better funded and more comprehensive approach and a more consistent approach across the board to dealing with the past.”

Maguire, who has three grown-up children from a previous marriage, remarried in 2015. As well as lectureships at Queen’s University, Belfast and recently in Australia he has his writing. He has an interest in art, likes cycling and travel and visiting his holiday home on the Fanad peninsula in Donegal, so he won’t be idle in the years ahead.