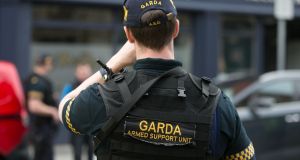 Two motorcycles, a van, a quantity of cannabis and €135,000 in cash have been seized from a house in the Windmill Road area of Crumlin as part of a search of premises linked to a group of bikers in Dublin.

The raid follows the arrests of four men, aged between 30 and 60, on the M7 on Thursday who remain in detention at various Garda stations in Wexford. No further arrests have been made.

Some members of the biker group are suspected of involvement in organised crime in Dublin, while at least four of the men are believed to have threatened two men in Wexford on Thursday during which a gun or replica gun was produced.

A large team of detectives from Crumlin accompanied by the Crumlin district drugs unit, community police, members of the armed Emergency Response Unit and the Garda national drugs and organised crime bureau began a search of the premises used by the biking club on Friday.

The search, which is being conducted under Section 29 of the offences against the state act 1993, continued on Saturday. A sum of cash and electronic devices were also seized.

The ongoing search follows the arrest of four men, aged between 30 and 60, on Thursday on suspicion that they travelled to Co Wexford to threaten a number of people earlier that day.

In one incident, four men went into a garage in the Clonroche area armed with what witnesses described as a handgun and threatened staff members, with two men based in the area the apparent targets of the group.

The men then left the scene in a silver Hyundai car and, while no shots were fired and no injuries were reported, the incident was reported to gardaí and a search operation began.

The same vehicle was later observed by gardaí on the M9 motorway and it was eventually intercepted by members of the ERU on the M7 near Naas, Co Kildare.

The four suspects were subsequently arrested on suspicion of possession of firearms at the scene after their car was rammed by gardaí.

Members of the same biker group led the cortege during the funeral of David Byrne, the Crumlin man who was shot dead in the 2016 shooting at the Regency Hotel, north Dublin, as part of the Kinahan-Hutch feud.

In the past, swords, knives and replica guns along with small quantities of cash and drugs have been found at a premises linked to the same group of bikers.

Gardaí believe some members of the group are close to the Byrne organised crime group; the Dublin-based gang that is effectively the Irish unit of the wider international Kinahan crime cartel.

Some members of the group are suspected of carrying out debt collection on behalf of criminals involved in organised crime, often using threats and violence to extort money from their victims.

1 Taoiseach claims Sinn Féin not ‘a normal political party’
2 Over 65s are expected to ‘crawl into corner and die’, says election hopeful Valerie Cox
3 Yacht captain guilty of drunk sailing had ‘God given right’ to be on Liffey
4 Man shot at in taxi claims bail conditions made him ‘sitting duck’
5 Man who killed Jastine Valdez shrugged before being shot by gardaí, inquest told
Real news has value SUBSCRIBE