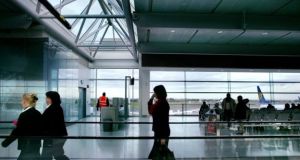 Airlines have been made aware by gardaí that they will be forced to find room on return flights for any foreign nationals they bring to Ireland who are found not to have the correct travel documents when they arrive in Dublin. File photograph: Kate Geraghty

The drop in the number of Albanians and Georgians applying for international protection in October is part of a concerted drive to discourage people from those countries claiming asylum in the Republic.

More people from these countries are now being stopped and turned back at Dublin Airport and, as a result, the first decreases in the number of Albanians and Georgians applying for international protection in the Republic has been recorded.

Airlines have also been made aware by gardaí that they will be forced to find room on return flights for any foreign nationals they bring to Ireland who are found not to have the correct travel documents when they arrive in Dublin.

“What we are seeing is more [Albanians and Georgians] being turned around but also airlines checking them more closely boarding flights into Ireland,” said one security source.

“So the lower number of people from Albania and Georgia applying for asylum is a combination of the two things. The guards have been doing more stringent checks for a while so it appears now it’s having an impact.”

An international crime gang of Albanian nationals gardaí believe is involved in drug dealing and people smuggling from its base in Dublin is also under investigation. One of the key figures in that group has been raided by the Garda in recent months and a significant investigation is continuing.

Minister for Justice Charlie Flanagan told The Irish Times earlier this year there was “concern” that the number of applications for international protection from Albanians and Georgians was so high and continuing to increase.

This concern was based on the fact Albania and Georgia are both classified as “safe countries of origin” by the Irish Government and that people from those countries should not typically require international protection.

Taoiseach Leo Varadkar went further last month when he said Albanian and Georgian people were arriving in Ireland under false travel documents and then claiming asylum in such large numbers they were driving trends in asylum.

Security sources said they believe it was clear Albanians and Georgians were “over represented” in international protection applications in the Republic.

Applications for international protection from Georgians in 2014, 2015 and 2016 were small. In 2017, however, 302 applications were received from Georgians and 282 from Albanians; more than any other country apart from Syria.

In 2018, Albania and Georgia topped the list by a significant margin. There were 459 applications from Albanians and 450 from Georgians. The two countries accounted for 25 per cent of the total 3,673 applications received from people of all nationalities in 2018.

In 2019, the trend has been even more pronounced. Albania again topped the list with Georgia next. In the first 10 months of the year there were 965 applications from Albanians and 614 from Georgians; or 38 per cent of all applications.

Garda and Government sources said the numbers are unsustainable and they do not believe they are justified given the security and political climate in both countries.

The same sources said the direct provision system was now under extreme pressure as numbers applying for asylum in Ireland were rising. They believed the increase in Georgians and Albanians seeking international protections was exacerbating the problem and the authorities planned to tackle this.

The EU did away with visa requirements for people entering the Schengen area of the EU from Albania and Georgia two years ago. It means it is now easier for Albanians and Georgians to travel to EU countries, where they can claim asylum. While Albanians and Georgians still require a visa to enter Ireland, Garda sources say some had used fake documents to reach Ireland.

He said “to pick out particular nationalities is dangerous and to suggest that a country is de facto safe for all is very dangerous”.

By naming the two countries, Mr Varadkar’s comments “suggest that everyone from those countries is not a refugee or doesn’t have claim for refugee status”.

Refugee status was determined by an individual’s circumstances, not their nationality, Mr Henderson said, and minorities and those from the LGBT community in Albania and Georgia had faced threats. Furthermore, those under threat in those jurisdictions cannot always rely on police protection, he added.