Detentions take place after joint operation between the Garda, PSNI and English police 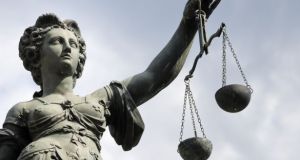 Seven suspected members of an international people trafficking gang using Ireland as a route into the United Kingdom have been arrested.

They were detained after a joint operation between the Garda, police in England and the Police Service of Northern Ireland.

The suspects, who are all from Georgia, are accused of facilitating their compatriots in travelling to the Republic and then on to Britain illegally.

Their detention, and what Garda sources believe is the dismantling of a people trafficking route, is significant because of the modus operandi involved.

Senior Garda officers are concerned the same mechanism will be used by some gangs to smuggle people into Britain when it becomes harder to enter there after Brexit.

And the same sources believe it could lead to a spike in the number of people claiming asylum in Ireland then vanishing from the system.

The Georgian nationals looking to enter Britain with the aid of the suspect gang members now under arrest first came to the Republic at the beginning of last spring.

Despite Britain being their intended final destination they remained in the Republic for a period, claiming asylum.

They were then smuggled by gang members, at times using false travel and immigration documents, by ferry to Britain.

An unknown number of Georgian nationals entered Britain in that way, taking advantage of the ease of transit within the common travel area.

However, gardaí began investigating when the number of Georgian nationals claiming asylum in the Republic increased.

In 2017, more than 300 Georgians claimed asylum here, more than any other nationality except Syria. Before 2017, the numbers from Georgia were negligible.

In March of that year new procedures meant they could travel to and from the Schengen area with no visa.

However, they still needed to enter Ireland and the UK. A number of Georgians began arriving in Ireland with the stated intention of travelling on to other countries.

But instead of catching connecting flights they had booked to their stated intended destination they were remaining in Ireland and making asylum claims. And after a period they were being helped by people traffickers, for a fee, to travel to Britain.

A major investigation involving the Garda, PSNI and British police was begun last year to target the scam. The Garda National Immigration Bureau has played a key role in the international inquiry which began in June of last year.

According to the Home Office, the raids were aimed at “dismantling a suspected organised crime group believed to be involved in the facilitation of Georgian nationals into the UK through Ireland”.

Seven suspects, aged between 26 and 45 years, were arrested and have appeared before the courts in Britain. They were remanded in custody pending further court appearances next month.

Det Chief Supt David Dowling, of the Garda National Immigration Bureau, said: “This is an example of the continued co-operation between the relevant agencies in our efforts to target all types of criminal activity, including illegal immigration in both jurisdictions.”

In addition to the six men and one woman charged, two other arrests were made for identity document offences. The two Georgian men, aged 28 and 31, were given police cautions and detained pending their removal from the UK.

And four other Georgians, two men and two women, were detained when they were found to be in the country illegally.