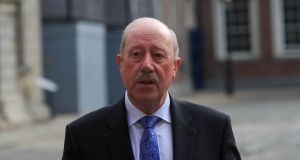 Former Garda commissioner of the Garda Siochana Martin Callinan at the Disclosures Tribunal in Dublin Castle in May. Photograph: Gareth Chaney Collins 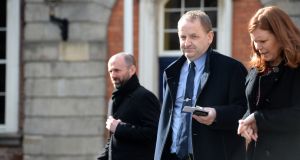 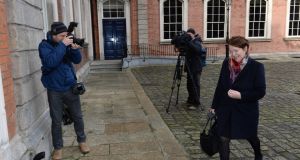 The sworn evidence given to the Charleton Tribunal by the former Garda commissioner Martin Callinan is “not credible”, a lawyer acting for Fianna Fáil TD John McGuinness has said.

The tribunal has been examining an alleged smear campaign against Garda whistleblower Sgt Maurice McCabe. The former head of the Garda Press Office, Supt Dave Taylor, claims he was ordered to conduct the campaign in 2013 by Mr Callinan and that then deputy commissioner, Nóirín O’Sullivan, knew about this. Both have denied Supt Taylor’s claim.

All of the witnesses to the tribunal have now given evidence and Mr Justice Peter Charleton on Thursday heard closing submissions.

A number of claims against Mr Callinan that he smeared Sgt McCabe are the most serious evidence in support of the allegation that has emerged at the tribunal. Mr Callinan has denied these.

Mr Darren Lehane BL, for Mr McGuinness, said Mr Callinan had “deployed the same tactic” in relation to the claims against him in saying that it was the other parties to conversations that had raised the issue of sex allegations against Sgt McCabe.

Mr McGuinness told the tribunal that in January 2014, during a meeting in a car park, he was told by Mr Callinan that Sgt McCabe had “sexually abused his family and an individual”.

Comptroller & Auditor General Séamus McCarthy has said that, on the day prior to the meeting in the car park, he had a brief conversation in Leinster House with Mr Callinan during which the commissioner said Sgt McCabe was not to be trusted and faced allegations over sexual offences.

Fine Gael TD John Deasy told the tribunal that, on the same day in Leinster House, he also had a brief exchange with Mr Callinan during which he was told that Sgt McCabe was someone who could not be believed or trusted.

The tribunal has also heard from broadcaster Philip Boucher Hayes that during a conversation in RTÉ in December 2013, Mr Callinan said to him that he could tell him things about Sgt McCabe, “the worst possible kind of things.” Mr Callinan has also denied this claim.

Michael O’Higgins SC, for Supt Dave Taylor, said the claims against Mr Callinan should be taken into account when considering his client’s claim that he had been instructed by Mr Callinan to conduct the smear campaign.

Supt Taylor has said he spoke to 12 named journalists as part of the alleged smear campaign. Mr O’Higgins said that 10 of these had denied being briefed, and two had refused to comment on grounds of journalistic privilege.

Mr O’Higgins said it was “an incredible coincidence” that Supt Taylor had made his claim about Mr Callinan while at the same time, according to the evidence heard from Mr McGuinness, Mr McCarthy, Mr Deasy and Mr Boucher Hayes, “something very similar was going on”.

“You are simply left with the assertion of my client.”

In a submission on behalf of the former commissioners and Garda HQ, Shane Murphy SC said that many of the allegations that had existed at the time of the tribunal’s establishment had become “received truths”.

He said there was no independent evidence to support Supt Taylor’s claim about being asked to conduct a smear campaign against Sgt McCabe by Mr Callinan, and that this was known about by Ms O’Sullivan.

The only evidence for the claim is that of Supt Taylor who, Mr Murphy said, is “utterly lacking in credibility”.

He said that Sgt McCabe, in his evidence to the tribunal, had accepted that he had no evidence that Mr Callinan had ordered a campaign and that this was known to Ms O’Sullivan, other than what he said he had been told by Supt Taylor.

A finding by the tribunal that there had been no smear campaign as alleged by Supt Taylor, would serve the public interest in establishing how a mere allegation could become a received truth at enormous cost to the individuals involved and enormous cost to society.

Mr Murphy is to continue his submission on Friday, which is scheduled to be the last day on which the tribunal will sit.