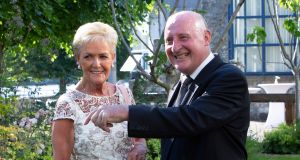 Gardaí investigating the killing of Detective Garda Jerry McCabe in 1996 appealed for fresh information to aid their investigation on Thursday as their late colleague was posthumously awarded the Freedom of Limerick.

Det McCabe died on June 7th, 1996 after a bullet from an AK-47 severed his spine during an incident in Adare, Co Limerick.

The Special Branch member and his colleague, Det Garda Ben O’Sullivan, were ambushed by a six-strong IRA group during a botched robbery as they escorted a mail and cash delivery van into the village.

Members of the IRA gang – Kevin Walsh and Michael O’Neill, from Patrickswell; Jeremiah Sheehy, from Rathkeale; and Pearse McAuley, from Strabane, Co Tyrone – were all convicted of Det McCabe’s manslaughter but have since being released.

Mr O’Sullivan, who survived the attack despite suffering 11 gunshot wounds and has since retired, was also made an Honourary Freeman of Limerick at a ceremony attended by members of Det McCabe’s family, including his widow, Ann, politicians, and high-ranking gardaí.

On Thursday Supt Derek Smart said two members of the gang were “still outstanding” and that gardaí were eager to interview them.

It has been suggested in media reports that one of the wanted men moved to Spain and the other in South America but gardaí said they do not know their present locations.

Mrs McCabe said her husband’s killers “are no longer part of my life now” and that her husband “died for Ireland – it was not his choice”.

She said “Jerry and Ben were ambushed by six criminals...who set out to rob and to kill to show how much they cared for Ireland and its people – they claimed to be patriots”.

“In the days and weeks and months that followed life has changed forever for me and for my family, ” she said, adding that they had been devastated by the “emotional trauma of it all”.

“It’s a very poignant day for us as a family, but also a very proud day. It’s hard to believe its been 22 years,” she said. “I also want to thank the people of Limerick for their continued support through the years.”

The State’s acceptance of manslaughter rather than murder charges in the subsequent court case, and calls by Sinn Féin later for the release of those convicted as political prisoners under the terms of the Belfast Agreement, created controversy in the region.

Minister of State Patrick O’Donovan, a Limerick County Fine Gael TD, said “Jerry McCabe was murdered in my opinion” and that he believed gardaí were as committed to resolving the case now as ever.

Mr O’Sullivan recalled the IRA gang ramming into the back of their patrol car before opening fire with a military-style machine gun.

“I never lost consciousness through it. I remember every aspect of it,” he said. “It’s engraved on my brain, but its not holding me back.”

Mr O’Sullivan, who has also received two Scott medals, awarded for acts of bravery in An Garda Síochána, said he would “cherish” the honour bestowed on him on Thursday “until the day I die”.

“However I feel humbled . . . I was lucky to escape alive. People said at the time I was invincible – that is totally inaccurate.”

Anybody who has information regarding the whereabouts of the two men being sought by gardaí is asked to contact the Garda Confidential Line on 1800-666111 or any Garda station.