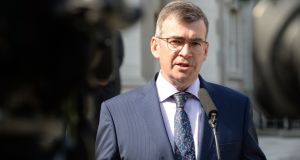 The Garda Inspectorate has warned Government that Garda retirements are set to spike over the next three years at a time when reform is required, making recruitment from overseas essential.

Some 550 Garda personnel will have to retire on age grounds by the end of 2021, just over half of them middle or senior managers. The figure does not include those who can retire early having served at least 30 years.

The Garda Inspectorate believes the expertise lost can be replaced and even surpassed with foreign recruitment drives, a development it says would also bring skills which are currently lacking in the force.

“They may have specialist policing skills which are increasingly in demand in a modern police service; public order, firearms, drugs investigation, child protection, cyber crime,” the inspectorate’s report for Government says of hiring foreign police officers.

It also said the Garda Reserve could be used to attract more diverse candidates, adding that reservists with specialist skills should be permitted to assist investigations.

“Recently, a City of London Police investigation into a £1.5bn fraud was assisted by the work of a special constable who was employed in the banking sector and who became one of the people leading the prosecution,” the inspectorate report points out.

It also says a limited scheme under which senior Garda and PSNI officers can transfer between the forces for secondments should be extended down the ranks.

And if that proved successful, the same arrangement should be put in place with other police forces. It would allow Garda members to work abroad for two years, learning new skills to bring back to the Garda and building relationships with police officers in other jurisdictions.

The Garda Inspectorate, which reviews all areas of the work of the Garda and recommends reform, was asked by Government almost two years ago to review entry routes into the force.

As well as recommending police officers in other jurisdictions be permitted to apply for all Garda vacancies into the future, it is proposing a trial at the rank of inspector under which civilians could be hired to enter the force as sworn officers. If successful, the practice would be rolled out up the ranks.

Proposals to open up recruitment were made to Government in 2007 but largely ignored. However, the Government has just approved the appointment as Garda Commissioner of PSNI Deputy Chief Constable Drew Harris.

He will be the first person from outside the State to lead the Garda when he takes up the post in September. Against that background, the prospect of the latest recommendations being acted upon is much higher at present than 11 years ago.

The inspectorate’s recommendations have been sent to the Commission on the Future of Policing in Ireland for its consideration.

Under current recruitment practices vacancies at only two Garda ranks are open to outsiders; Garda commissioner and deputy commissioner.