Lowry’s trial was State’s first for ‘paying too much tax’, says his solicitor 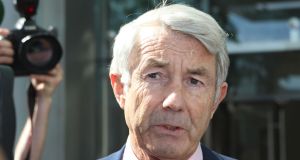 Michael Lowry’s tax conviction was the first time in the history of the State that a citizen had been put on trial for “paying too much tax”, the Tipperary TD’s solicitor, Michael Collins, has said.

Mr Collins said that Mr Lowry’s trial and conviction by a jury of the Circuit Criminal Court was the result of a 2006 overstatement of company profits and consequent incorrect tax return.

The legislation surrounding the charges, The Tax Consolidation Act, is silent on the point of overpaying. It is not dependent on there being a deprivation or a gain to the State for a prosecution to ensure.

Mr Collins said it was “a simple situation” about an invoice that was “accidentally missed”, Mr Collins told Tipp FM on Wednesday. Despite that, the jury of ordinary people had had to wade through hundreds of pages leading to an outcome that was “very good” for Mr Lowry.

In a combative performance, Mr Collins claimed that “for years” Mr Lowry had been accused “by the Dublin media in particular” and his trial had been “the culmination of that narrative”.

He attacked by name Dr Elaine Byrne, a barrister and sometime governance consultant on corruption for the European Union, United Nations and World Bank, who he said was “involved in background efforts to prosecute Michael Lowry”.

Mr Collins said that as a result of State efforts against Mr Lowry, his home had been raided by a “team of Revenue officials, complete strangers” who had “invaded” the house and rifled his personal effects. That had hit the TD “hard and big” said the solicitor.

The State had the trial moved from Tipperary to Dublin, a measure the solicitor said that had only previously been applied to trials related to Limerick-based criminal gangs.

The Tipperary TD’s popularity in the constituency was because of his hard work.

What has always amazed him about Michael Lowry was “his work rate and his dedication to dealing with the problems of ordinary people in his constituency”, he said.

He went on to describe the Moriarty Tribunal as “highly oppressive”.

The tribunal concluded it was “beyond doubt” that the TD had, as minister, gave “substantive information to Denis O’Brien, of significant value and assistance to him in securing the [mobile telephone] licence”.

Mr Collins said this was merely an “opinion” and had no legal standing. It was, said the solicitor, a “useless, sterile opinion” and a “shameful waste of public money”.

It said that €130 million had been spend on the tribunal and that there would be “no housing crisis” had the money been put to that use instead.