Drew Harris profile: ‘One of the most decent human beings I worked with in the North’ 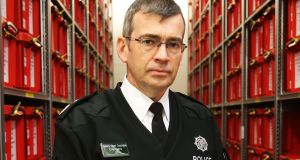 The move by Drew Harris from the PSNI to become Garda Commissioner is groundbreaking and one that will be greeted with surprise in Garda circles. Photograph: Brian Lawless/PA Wire

It’s a hell of a job he’s taking on. That was the verdict of a source close to incoming Garda commissioner Drew Harris OBE; a 53-year-old Police Service of Northern Ireland (PSNI) senior officer who joined that organisation when it was the RUC.

While the appointment of a PSNI member to the most senior Garda post will be seen as controversial in some quarters, Harris is no stranger to his appointments ruffling feathers.

When he was promoted to his current role, Sinn Féin’s Caitríona Ruane withdrew from the Policing Board panel that would go on to select Harris, saying she believed the process may have been compromised.

However, this was rejected, and Harris, regarded as a modest and quiet officer, got the job. He will be in Deputy Chief Constable role for four years by the time he steps down to become the next commissioner of An Garda Síochána in September.

How Sinn Féin in the Republic greet his appointment, and possibly work with him if they are in Government after the next election, will be fascinating.

Some in the party resented Harris for the 2014 arrest of Gerry Adams, in connection with the 1972 abduction and disappearance by murder of Jean McConville. They believed Harris was responsible for the decision to arrest, rather than simply interview, Adams.

Earlier this year, Harris and PSNI Chief Constable George Hamilton were cleared of allegations of criminal activity and misconduct in public office, after an investigation by the North’s police ombudsman into complaints over a PSNI bribery inquiry.

In 2012, he gave controversial evidence to the Smithwick Tribunal in Dublin. It was investigating possible Garda collusion with the IRA in the murders of RUC officers chief supt Harry Breen and supt Bob Buchanan in March, 1989, shortly after they left Dundalk Garda station.

A précis of the first intelligence report claimed the Provisional IRA “traditionally obtained good intelligence from Dundalk Garda station”. A second suggested well-known republican Patrick “Mooch” Blair had claimed there was a “Garda spy” involved in the murders of the RUC officers.

Lawyers for then Garda commissioner Martin Callinan said the evidence amounted to “nonsense on stilts”.

However, Judge Peter Smithwick concluded in his final report that, on the balance of probabilities, there was collusion between unnamed and unknown Garda members based in Dundalk and the IRA in the murders of the two officers.

While the matter was very controversial, relations between the Garda and the PSNI have grown stronger in the intervening years.

A married man with four children, Harris has almost 16 years experience in senior management roles in the PSNI.

Before becoming Deputy Chief Constable in 2014 he was assistant chief constable, from 2006, and worked closely with MI5. He was in command of the PSNI Crime Operations Department which included the force’s intelligence branch, major investigation teams and specialist operations branch – all at the coal face of combating terrorism and other serious crimes. Harris received an OBE in Queen Elizabeth’s birthday honours list in 2010.

He is from a policing family; his father was murdered in an IRA bombing at the height of the Troubles. RUC supt Alwyn Harris was killed in October, 1989, in a targeted attack intended for him.

A Semtex car bomb exploded under the family Vauxhall Carlton while he and his wife were driving to a Sunday church service.

Drew Harris’s mother survived the blast that killed his 51-year-old father on the way to a Harvest Thanksgiving service near their home in Lisburn.

The incoming commissioner has been described as quiet, calm and a very professional officer with an understated style of leadership.

While Harris coming from the RUC to the top Garda job will be regarded by some as culturally jarring, if an outside candidate was to be favoured one from the PSNI is perhaps not an unusual choice.

Harris would, for example, know many of the senior officers across the Garda organisation. He would have developed an understanding of how the Garda works and developed relationships with senior Garda officers as both police forces have worked together on cross-Border policing and anti-terrorism operations.

Indeed, the biggest threat to the security of the Republic and the North are one and the same – dissident republicans rather than international terrorism.

The vacancy Harris is set to fill as Garda commissioner arises because of Nóirín O’Sullivan’s departure last September. She has since secured a new post as director of strategic partnerships for Europe with the International Association of Chiefs of Police (IACP).

In her absence, Deputy Commissioner Dónall Ó Cualáin has stepped up to become acting Garda commissioner. And while he was set to retire this year he has been granted an extension to continue leading the force until September when Harris arrives.

In appointing Harris, the Government clearly believes he is the man to manage the reforms, which will take his full five-year term, and perhaps another five years after that.

His move from the PSNI into the Garda is groundbreaking and one that will be greeted with surprise in Garda circles. The force has no history of recruiting police officers from other organisations. Indeed an exchange scheme put in place for Garda and PSNI members has witnessed very modest take up down the years.

However, with the PSNI having undergone transformative change in the period Harris has been in the organisation, he has been hired to lead the Garda organisation on a similar path of reform.

He enters into the top post in the Garda after a period of controversy. The matters raised by whistleblower Sgt Maurice McCabe, including the cancellation of motoring penalty points, were compounded by allegations he was smeared to discredit him; the Charleton Tribunal is set to soon decide if there was a smear.

The last two commissioners – Callinan and O’Sullivan – retired at no notice, in 2014 and last September respectively – under the weight of the McCabe controversy, and other issues.

There have also been scandals around the inflating of breath-test data, financial governance at the Garda College, Templemore, Co Tipperary, and with the accuracy of the official homicide data.

If that wasn’t enough, a major modernisation and reform programme is underway in the Garda. The organisation is also in the middle of an accelerated recruitment drive and is aiming for civilianisation of some roles on an unprecedented scale.

The Commission on the Future of Policing in Ireland has also been working away in the background. It is expected to recommend significant reforms, as yet unknown, for the organisation. It is due to report in September, around the same time Harris leaves his post in the North to become the Dublin-based commissioner, though whether he will live in the Republic full-time is not clear.

He must first establish his authority in the Garda as commissioner; easier said than done for an outsider, perhaps especially one from the PSNI.

He must also accelerate and bed-in the reforms already underway. And he must manage the changes that the commission on policing recommends.

What he must absolutely achieve, perhaps above and before any of the other items in his in-tray, is to end the scandals that have beset the Garda in recent years. His must be seen as a new tenure; a true break from the past.

As an outsider, at first glance that seems a foregone conclusion. But if he were to be blindsided by any new scandals, or any botched approach to solving existing problems, he would run into problems very quickly.

In that case, his one big asset – that he has no connection to the past problems in the Garda – would be undermined. He would be open to the charge that career Garda officers were still running the force.

A source close to Harris told The Irish Times that all the “bitterness and recrimination of the past and the bad old days will be gone” as a new generation is taking over the police.

“Drew went for the job [PSNI Chief Constable] George [Hamilton] got and he effectively thought his career was over,” the source said.

“I think a lot of people will be surprised he got the role because he was passed over for the big PSNI job.

“He’s a very safe pair of hands. He’s very modest. He has worked in difficult circumstances.”

The source said “the old brigades” on both sides of the Border are gone, so Harris will find himself heading up a police force filled with younger people who do not have the baggage of the past.

“Relations between the guards [Garda] and the PSNI is very good, whereas in the past it was poisonous.