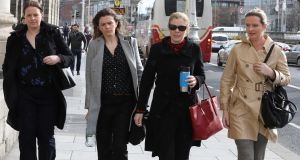 The State’s battle with the Quinn family has cost the public up to €170 million in legal and other fees, missing rental incomes, and other money that has gone astray, according to informed sources.

In the High Court on Tuesday, the adult children of the former billionaire Seán Quinn agreed a deal with the State-owned Irish Bank Resolution Corporation (IBRC) whereby they withdrew their action against the IBRC, and the IBRC settled its action against the Quinn children and others.

As part of the arrangement, the children have consented to judgment for €440 million, or some €88 million each. But execution of the judgment is to be stayed on condition the five take steps to help the IBRC secure an international property portfolio worth in excess of €500 million. The sale of this property would then be used to settle the debt owed by the Quinns.

The IBRC, which is currently in liquidation, has been seeking to assert its rights over the international property portfolio since 2011, and has accused the family of conspiring to frustrate these efforts. The family has said it did put in place a scheme to frustrate the bank’s efforts, but was in turn double-crossed by parties in other jurisdictions that became involved in the scheme.

The global battle by the IBRC to assert its ownership over the property has cost tens of millions of euro in legal and other fees. A scheme involving a Russian asset-recovery group, which did not proceed as planned, cost the State-owned entity approximately €25 million. Between these international efforts and preparations for the now-settled cases in the High Court, the IBRC has incurred costs of more than €100 million, according to informed sources.

Rent which was collected but which went missing, as well as other missing monies, total a further €60 million to €70 million, according to the sources.

The Quinns have agreed to co-operate by facilitating the State-owned bank in cleaning up the family’s property interests, explaining what happened to the properties, identifying amounts of cash within the property group, and tidying up other matters.

The properties include a hotel in Prague, two properties in Russia, two in Ukraine, one in the UK and one in India, as well as two hotels and four pubs in Ireland.

Family homes will remain untouched in the settlement. There is said to be little equity left in the properties given the amount the siblings have borrowed to cover the legal fees arising in the eight-year-old actions.

The settlement could bring forward the completion of the liquidation of the former Anglo Irish Bank by between 18 months and two years, one source said, as a result of the complex litigation with the family coming to an end.

“Anything that brings the liquidation forward has to be a good thing,” said the source. “The Quinns have basically dropped all their claims and they are getting nothing in return. They are going to help the liquidators to get the assets back.”