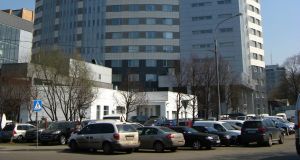 The Kutuzoff tower in Moscow was part of the Quinn family’s international portfolio.

The attempt by the Quinn family to stop its international property portfolio being seized has cost the State up to €170 million, according to informed sources.

Legal costs and costs associated with an asset recovery scheme have been put at approximately €100 million, while missing rental payments and other monies taken from the property group, and not recovered, are in the region of €60 million to €70 million, according to sources.

The plan to frustrate the nationalised Anglo Irish Bank from asserting its control over the property group, was approved by Seán Quinn senior in 2011, against a backdrop of the collapse of Anglo Irish Bank and its decision to seize international property owned by Quinn’s children that was worth approximately half-a-billion euro and had been used as collateral against loans.

The commercial property was in Ukraine, Russia, Turkey, India and elsewhere, and the corporate structure by which the property was owned involved even more jurisdictions.

In their effort to frustrate Anglo, the Quinns engaged a law firm in Dubai called Senat, which in turn began working with law firms in Moscow, Kiev, and elsewhere.

Bizarre court claims involving tens of millions of dollars began to be made in courts around the world, involving companies based in Belize, the British Virgin Islands, Hong Kong, and elsewhere.

The effort to try assert Anglo’s ownership was led by McCann Fitzgerald solicitors in Dublin, which in turn engaged law firms in other jurisdictions as it sought to assert the bank’s rights in what was a constantly changing, obscure and bizarre international scenario.

As the hugely expensive and wasteful global battle waged, tens of millions of euro in rent continued to be collected. Anglo became the State-owned Irish Bank Resolution Corporation (IBRC), which after years of court battles managed to assert its rights over much of the property. But missing rent roll and other missing sums, possibly as much as €60 to €70 million, has not been recovered.

According to an informed source, approximately €70 million has been spent, mostly on legal fees, in the international effort by the now-in-liquidation IBRC to get control of the property, as well as legal disputes at home with the Quinns. As the IBRC is a state-owned entity, the cost ultimately falls on the public purse.

A further €30 million was spent on a scheme the IBRC entered into with an entity owned by a number of Russian oligarchs, which it was hoped would assist the IBRC get control over valuable property in Kiev and Moscow. The IBRC hoped entering into an arrangement with the powerful Alpha Group, would help it fight shadowy figures that the IBRC believed were involving in securing dubious rulings from local courts.

However, the Alpha Group arrangement was abandoned after the value of the Russian and Ukrainian properties plummeted when Russia invaded Ukraine in 2014.

The IBRC believes that a significant amount of missing rent and other monies was used by the Quinns to fund the effort to thwart the bank. The rest of the money is believed to have been taken by various shadowy figures who were involved in the international scheme.

According to a second, informed source, at the time Anglo first discovered that efforts were being made by the Quinn family to frustrate it asserting title over the international properties, discussions took place with the Quinns, during which the family sought a substantial sum in return for desisting in the scheme.

“I won’t say how much, but it was a sizeable chunk of money” said the source. The bank told the Department of Finance about the offer, and was told that the then Minister, Michael Noonan, would “not be happy at all” to see such a deal being agreed.