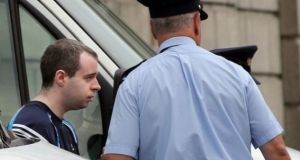 Eric Eoin Marques, the Irishman alleged to be world’s largest facilitator of child pornography, could face up to 30 years in federal prison on each of the four charges against him

Why can’t Eric Eoin Marques, the Irishman alleged to be world’s largest facilitator of child pornography, be put on trial in Ireland?

That was the primary question posed during a six-year legal battle that came to an end on Wednesday when the Supreme Court rejected his final appeal, clearing the way for his extradition to the US.

Marques (33) is an Irish citizen; has an Irish mother and has lived here since a young age. He lived in Ireland during all of his alleged offending. He was arrested here, albeit at the instigation of the FBI, and the only physical evidence against him, his home computer, was seized here.

The case bears some similarity to that of late Workers’ Party president and IRA veteran Seán Garland, who was wanted in the US on charges of forging bank notes. In 2011, the High Court refused to extradite him, stating that since most of the alleged offending occurred in Ireland, any potential trial should take place here.

In the case of Marques, it was the opinion of the Director of Public Prosecutions (DPP) that he should face no charges here. The DPP operates in near-complete secrecy in how it comes to its decisions, a policy upheld in a series of judgements in the Marques case.

Nearly all of the evidence against him was gathered by FBI agents, meaning the use of such evidence in an Irish court would have been, at the very least, open to challenge. However, these obstacles would have been moot if the DPP accepted Marques’s offer, made shortly after his 2013 arrest, to plead guilty to the charges if prosecuted in Ireland.

With Wednesday’s ruling, Marques has used up all his appeals

Marques’s reasoning for wanting to face trial in Ireland rather than the US is easier to figure out. If convicted here the maximum sentence would be 14 years. With the mitigation of a guilty plea, along with up to one-third remission, he would likely only spend a fraction of that in prison.

In the US he could face up to 30 years in federal prison on each of the four charges against him.

He is accused of renting out his vast network of servers to websites such as Lolita City and PedoEmpire which trade in the buying and selling of the most extreme forms of child abuse material. He is also alleged to have profited greatly from this activity, earning €1.15 million over a five-year period.

With Wednesday’s ruling, Marques has used up all his appeals, as the European Court of Human Rights has declined to hear his case.

In the next few days he is likely to be escorted from Cloverhill Prison to Dublin Airport where he will be put on a US-bound flight and handcuffed to a waiting US marshal.