Many rural areas could lose local access to cash because of such attacks, warns Retail NI 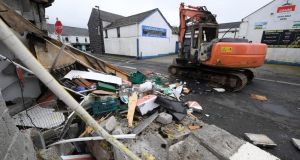 Brook Street in Ahoghill, Co Antrim, where an ATM was stolen from outside a shop. Photograph: Justin Kernoghan 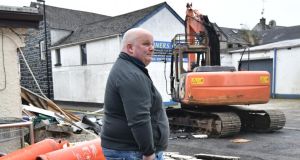 The theft of ATMs – the latest early on Monday morning in Ahoghill, Co Antrim – has become such a common occurrence on both sides of the Border, but particularly in Northern Ireland, that it has become the subject of black Ulster humour.

The recent St Patrick’s Day parade in Cavan featured a float of a digger prising a cash machine from a wall, demonstrating the prevalence of this problem.

In the past year in Northern Ireland and close to the Border there were 11 ATM thefts. In sequence since March last year the towns hit were Keady in Co Armagh; Ballyclare in Co Antrim; Ballybay in Co Monaghan; Fintona in Co Tyrone; Moira in Co Down; Antrim town, Omagh and Dungannon in Co Tyrone; Newtownabbey in Co Antrim; Irvinestown in Co Fermanagh; and now Ahoghill.

Seven of the Northern Ireland ATM thefts have been carried out since the start of the year. Police have not said how much money has been lost in all these thefts but it is estimated to be many tens of thousands of pounds.

The victim of the latest theft, shop owner Walter Miller, said when he was informed that his premises had been targeted at first he thought it was an April Fool’s joke. It was on April 1st 30 years ago that he started the business and he thought when he got the phone call it was someone engaging in a timely prank.

But it was no joke. This latest theft involved the gang taking a digger from a nearby building site, a regular modus operandi, and then using it to rip out the cash machine from Mr Miller’s store which sustained considerable damage.

The criminals frequently use trailers or pickup trucks to take away the ATMs, but in this case they cut the roof off a people-carrier vehicle, placed the machine in the car, and then drove off. It is estimated the operation took less than two minutes.

The PSNI has formed a special unit to tackle such crime. Det Chief Insp David Henderson said he believed several gangs were involved in the crimes. He said there also could be paramilitary involvement through the paramilitaries carrying out the thefts themselves or through taxing the gangs who were involved. He said their operations were “sophisticated”.

He also referred to the social element of these incidents. “As in all of these ATM thefts, the actions of these criminals have not only caused immediate financial harm to the business that was targeted, but they have understandably caused fear in the community and impacted upon a vital service many local people rely on,” he said.

Glyn Robert, chief executive of Retail NI, also reflected on how the high incidence of such thefts was causing a major problem in rural areas. “If the criminal gangs behind these ATM robberies are not stopped, there is a real danger many rural communities will lose local access to cash,” he said.

“They are attacking local family-owned small businesses which are the backbone of the rural economy, providing an invaluable service to the local community,” he added.

Mr Roberts said that many of his members in rural areas were deciding to have ATMs in their shops removed because of the threat and the cost. “These aren’t multinationals, these are people providing a badly needed community service. To have a longstanding independent retailer like Walter Miller who cares passionately about his local community seeing his shop damaged is soul-destroying,” he said.