Clamping: ‘There is something dodgy about the machines’ 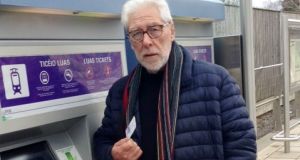 “You cannot discuss anything with the clamper, you cannot engage,” says Martin Swords, who insists he has been wrongly clamped twice at Carrickmines Luas station in south Dublin.

“You have to ring a number, give them a credit card. There is no one to talk to. You are talking to a machine. So you are wasting your time jumping up and down – you just have to pay your 80 quid.”

From Ashford, Co Wicklow, the retiree says he was clamped because a machine was printing out the wrong numbers on his parking ticket.

“The only way around it is to pay the fine. I spoke to the clamper about it, and he said his hands were tied, there was absolutely nothing he could do.

“He said ‘no point in talking to me mate. I just put the clamp on and take the clamp off, whenever the system tells me’. I said there is something wrong here, there is my registration number on the car and there is my ticket, wrong by one digit.

Mr Swords said when he got home he said “to hell with this, it is not good enough, and I wrote to [Luas operator] Transdev”.

“Eventually, they agreed to reimburse me half the fine – they gave me back 40 quid. I asked were they only half wrong? I ended up taking the 40 quid to cut my losses. But you are either wrong or not wrong.”