Shock in Garda at sudden cancellation of overtime 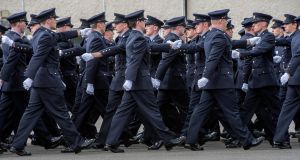 The unit focusing on Hutch-Kinahan feud is one of only two exceptions to the overtime ban. Photograph: Brenda Fitzsimons

Policing in Dublin and other major urban centres in the State is to be seriously affected by a snap decision to cancel Garda overtime.

Senior officers in charge of policing have been told in some parts of Dublin they can cease burglary response operations and reassign personnel to more immediate duties.

Letters were sent on Tuesday to superintendents in charge of policing in the six divisions that make up the Dublin region informing them that the cancellation of overtime was effective immediately.

The cuts have been greeted with shock across the force, especially in Dublin and Cork. However, no area of the State will escape the budget reductions.

A number of well-placed sources said it was believed the cuts would be sustained into the New Year, when a second budget reduction may be needed.

In Cork and Dublin senior officers were called to meetings and sent written directions to cease sanctioning overtime, effective from Tuesday.

One such letter, sent by Chief Supt Frank Clerkin to officers in the Dublin South Central division, stated there were only two exceptions to the overtime ban. These are Operation Hybrid, targeting the Kinahan-Hutch feud, and Operation C-Port, which aims to increase security at Dublin Port. Chief Supt Clerkin has told his senior officers “under no circumstances is overtime to be incurred” elsewhere.

“No other overtime is authorised and all operations intended on an overtime basis are hereby cancelled, district officers will ensure this is strictly adhered to,” he wrote, adding that he “fully appreciates the difficulties associated with this direction”.

With that in mind Chief Supt Clerkin suggests a number of policing services that should be prioritised, including answering the telephone and manning public counters at Garda stations. Prisoners are to be managed at only one station per district and there is to be only one patrol car covering each district.

In order to help superintendents cope with the budget cut, he suggests a number of steps be taken including “decommissioning” burglary response units and diverting the personnel involved to their home stations and diverting staff on administrative duties to frontline policing.