Reopening Stepaside not a priority for head of Dublin policing, Pac hears

‘I have other pressing demands on resources across the region,’ senior Garda says 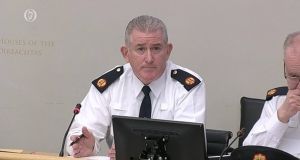 The senior Garda officer in charge of policing in the Dublin region and community relations nationally has said the reopening of Stepaside Garda station would not be a top policing priority of his.

Assistant Commissioner Pat Leahy made his comments in response to questions at the Public Accounts Committee by Labour TD Alan Kelly.

He asked Mr Leahy if he agreed Stepaside was the “largest priority for reopening” considering what he knew about the policing needs in Dublin.

“It was the only one that met the criteria that had been set out,” he said of the criteria set by Government.

“From a personnel point of view it would not have been my priority. I have other pressing demands on resources across the region.

“If I was being given extra, additional, manpower today Stepaside would not be my first allocation.

“I could not send guards to Stepaside before I’d send them to Ballyfermot, Ronanstown, the north inner city or the south inner city.”

When it was suggested to him by Sinn Féin TD David Cullinane that that decision was already made, Mr Leahy replied: “No, no; nobody has directed me to do anything yet.”

Mr Cullinane said it was his personal view that the Government had set the criteria in such a way as to ensure Stepaside was selected for reopening.

Mr Leahy revealed he cautioned at the time the decision was being made that the reopening of Stepaside could not come at the expense of the existing policing strength in the division.

He added “in terms of the criteria set out, Stepaside fairly and squarely met those criteria”.

Mr Leahy said the station, which minister Shane Ross promised his constituents would reopen, was an obvious choice based on the Government criteria for selecting stations to reopen.

He added at the time the station closed, 34 Garda personnel were based there. However, under the proposed terms of its reopening it would be staffed by half that; two sergeants and 15 gardaí.

Assistant Commissioner John O’Driscoll said when he wrote to all assistant commissioners with a view to implementing Government policy of reopening six Garda stations his colleague Mr Leahy was one of those consulted.

Based on the criteria and with a process with limited remit, Mr Leahy had recommended Stepaside reopen.

Mr Leahy confirmed he had recommended in May Stepaside be reopened “based on the criteria set out”.

He said Stepaside should be reopened, along with Rush and that Cabra and Dublin Airport have their opening hours set out.

However, Mr Leahy added that if the criteria for the selection of stations to be reopened was set aside, there were other priorities in policing in Dublin above reopening Stepaside.

Mr O’Driscoll added a new station could be built in the area close to Stepaside and he had recommended that long-term possibility be factored into the decision to reopen Stepaside.

He believed a new station could be built in Cherrywood, though that may be around the year 2030.

Acting Garda Commissioner Dónall Ó Cualáin said he had already approved the recommendation of the internal Garda process, based on the Government criteria, that Stepaside be reopened.

However, he cautioned “issues could arise” such as with the suitability of the building.

John Barrett, the Garda’s head of human resources, said he was not consulted with the reopening of Stepaside.

Acting Garda Commissioner Dónall Ó Cualáin confirmed to Mr Cullinane that the Government criteria for reopening six stations, of which Stepaside is one, was for guidance.

However, the then Garda commissioner Noirin O’Sullivan had chosen to use the Government criteria.

Earlier there were tense exchanges between acting Garda Commissioner Dónall Ó Cualáin and members of the Public Accounts Committee over a unit set up to liaise with the Charleton Tribunal.

The tension arose as Alan Kelly TD sought to question garda officers and Department of Justice personnel about the creation of the unit within the Garda, established to liaise with the tribunal, which is investigating how the Garda force reacted to the whistleblower Sgt Maurice McCabe.

Mr Kelly said he was “deeply concerned” his questions were not being answered.

Ray McSharry TD (FF) was critical the meeting was “taking refuge” in the fact a tribunal was underway.

When the Garda’s head of human resources John Barrett began to speak, Mr Ó Cualáin insisted he was unhappy with discussing the creation of the Garda unit because the tribunal’s work was well underway.

At another point, Mr Ó Cualáin told Mr Kelly: “I’m not going to answer that question.”

He believed the meeting was beginning to “stray into” matters before the tribunal.

Mr McSharry told Mr Ó Cualáin to desist from interrupting Mr Barrett, who indicated he had raised some concerns with how the liaison unit was created, though he did not get the opportunity to expand on that reply.

“He didn’t want this man to say anything at all,” he said of Mr Ó Cualáin interrupting Mr Barrett’s answers.

“Can I insist that the Commissioner be quiet?”

Mr McSharry then said Mr Ó Cualáin was making “vexatious intrusions” because of potentially what Mr Barrett might say.

It emerged that verbal sanction for the creation of the unit, made up of two retired garda members, was given to the then garda commissioner Nóirín O’Sullivan over the phone on February 21st.

Department of Justice secretary general Noel Waters said he had given that sanction.

The recruitment of the personnel to staff the unit then got underway. However, written sanction was not received for the expenditure for the unit until May 5th.

The written sanction came from the Department of Public Expenditure and Reform.

Mr Ó Cualáin and Mr Waters both said they were satisfied at the manner in which the unit was created and staffed.

However, Mr Barrett indicated he had some concerns and he made those concerns to the head of legal services in the Garda.

However, his responses were then interrupted a number of times by Mr Ó Cualáin. And Mr Fleming also expressed concern that Mr Barrett was straying into an area the committee was not concerned with today.

Mr Kelly said he was deeply unhappy that his questions on the matter, both at the Pac today and via parliamentary questions in recent weeks, had not been properly responded to.

He said he was “deeply concerned” and “absolutely deeply unhappy” he could not get replies. He insisted he was only asking about the creation of the unit liaising with the Charleton Tribunal on behalf of the Garda, rather than seeking information about the workings of the tribunal.

He believed as a public representative and the deputy chair of the Pac he was entitled to ask questions about how “taxpayers’ money was being spent”.

Concern has previously been expressed about how the unit was filled and why two retire senior garda personnel were brought back to man it.

Mr Ó Cualáin said retired members were used because of staff shortages in the Garda force.

The committee was also due to discuss the controversy around how Garda stations were selected for reopening, including Stepaside in Dublin.