‘I was scared for years. Scared they’d come back’

As a child, Megan Delaney witnessed her father’s shooting. Nine years later, he remains in a permanent vegetative state, and she is on the brink of adulthood 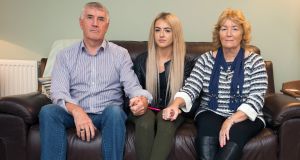 Terry and Noeleen Delaney, with their granddaughter Megan Delaney (16), whose father Robert Delaney has been in a permanent vegetative state for nearly 10 years. Photograph: Dave Meehan/The Irish Times

A neat pile of clothes sits on Noeleen Delaney’s kitchen table. They have been washed, ironed and folded with almost military precision by a mother’s loving hands.

This has been the ritual now for almost a decade; much of her days are dedicated to the care of her son, though he is now a 36-year-old father-of-two himself.

Back in 2008, Noeleen’s and Terry’s only son Robert had just become a father for the second time.

The early days of the recession had seen the construction trade devastated, and with it his painting and decorating business. But the then 27-year-old had secured a new job, as a postman, in the nick of time.

And as his second daughter arrived into the world it seemed he was one of the lucky ones; a boom-time construction worker who had sidestepped the prospect of long-term unemployment. But his luck wouldn’t hold.

Today Robert Delaney lies motionless in a bed in Peamount Hospital in Co Dublin in a permanent vegetative state. He’s now in his 10th year in that condition. And the medical staff believe he could survive that way for several more decades.

The gunshot he suffered at his home in the early hours of Wednesday, October 22nd, 2008, effectively killed his brain but not his body.

He is not on a life support machine as he doesn’t need one.

He is fed and watered from a small device that delivers the optimum hydration and nutrition he needs.

He has been in this sleep-like state for 3,321 days. His family were, and still are, heartbroken.

But somehow they are still standing.

“Everybody says it to me; I got my laugh back, though it has taken me years,” Noeleen says.

“I lived in hope. I prayed so hard. I really hoped God would give Robert back to us. But he didn’t; you know. I miss him every day. As long as I am alive and he is alive then we will go to him; we will go and see him. We’d never turn our back on Robert; no, never.”

The horror story began in August 2008, when Robert Delaney intervened to rescue a man being beaten up outside a pub in Saggart, Dublin.

Unknown to Robert at the time, the man he fought off was connected to the republican movement.

In the immediate aftermath of the incident, threatening phone calls were the first indication something serious was afoot. Then came demands for money, to “compensate” the man Robert had struck.

Not long after that came a 6.30am knock on the door of the apartment were Robert lived with his partner Mags and daughters Megan, then aged six, and Katie who was just one year old.

Robert got out of bed and looked over the balcony of his apartment on Russell Rise, Tallaght, to see who was calling so early.

A masked gunman below discharged a shotgun up in his direction.

The pellets sprayed the young father in the face, and he slumped to the ground, badly wounded and unconscious. Mags and young Megan looked on in horror.

The gun attack was the first Terry and Noeleen Delaney knew that their son had been dealing with threats for a number of months; their shock was compounded as Robert had never been involved in any form of crime.

But very quickly they would learn who the suspects were – republicans who organised and paid for the shooting of their son in revenge for his intervention in Saggart.

Initially Robert was rushed from the crime scene to Tallaght Hospital, where staff expected him to die of his injuries.

He was transferred to Beaumont Hospital across the city, where surgeons removed parts of his skull to allow his brain to bleed and swell without killing him.

He would develop epilepsy from his injuries as well as life-threatening heart palpitations and even MRSA.

However, he was in excellent physical health before the shooting, and that carried him through the most dangerous first weeks and months.

He went on to be treated at the National Rehabilitation Hospital in Dún Laoghaire, where staff could find no trace of brain activity, before eventually being transferred to Peamount in Newcastle, Co Dublin.

Nothing has really changed for Robert in those nine years, nor will it ever change for him.

“But in Peamount, the unit he’s in is a brain injury unit, and there are people there with greater or lesser brain injuries; some terribly tragic circumstances.

‘Stop feeling sorry for yourself’

“The one thing you do in Peamount is that you stop feeling sorry for yourself. You meet other families and you exchange stories; you say to yourself ‘jeeze, how did that happen’.”

Noeleen once mentioned to staff that her son “used to love having a bath, you couldn’t get him out of it”. Immediately those who cared for Robert took it upon themselves to start giving him baths.

On another occasion, when Terry told the staff his son loved Christy Moore, they organised for them to go to one of the singer’s gigs at Vicar Street in Dublin’s city centre, with Robert in an adapted wheelchair.

“We got the best seats in the house,” recalls Terry of the outing.

“We brought his bodhrán, and Christy Moore signed it for us; ‘To Robert, ride on bro’. It was a real tear-jerker for us, very upsetting.

“But the staff from Peamount took the attitude, ‘What’s the big deal, he’s in a wheelchair, so what? Let’s get on with the gig’.”

Their lives now revolve largely around their daily visits to their son’s bedside. Noeleen says while they are frustrated the arrests of several suspects in the case down the years have not resulted in anyone being charged with shooting her son, she is in a better place now.

They can even bring Robert home, in a mobile bed, to spend special occasions such as Christmas in their house. But while their near-decade of grief has morphed into a better life, Noeleen says the fact her two granddaughters have been denied their father remains devastating to her.

“Megan had a great relationship with her dad, she really did, and she remembers the times they had together,” she says.

“With Katie, she will tell you she remembers Robert, but she was too young. She’d love to have those memories.

“Megan flew through her Junior Cert with nine honours, I know her dad would be so, so proud of her; like we are.”

But for the 15-year-old Megan, the pain of what has happened to her father floods out tearfully the moment she begins to speak about him.

Approaching her seventh birthday on the day her father was shot, she says she has difficulty recalling all of the events of the time. Cruelly, the memory of seeing him collapsed after being shot remains most vivid for her.

“I remember parts of the day; I remember seeing him on the floor. And I remember being brought to my auntie’s house and being put in a chair wrapped in a blanket.

“I can remember sitting on that chair and being told what had happened. I was scared for years. I couldn’t sleep. I was scared they’d come back.”

Asked how she explains to friends what happened to her father, Megan says she has avoided broaching the subject.

Terry and Noeleen say she has never spoken about it, and they marvel at her willingness to do so now in an interview.

“I never really told any of my friends. I think now they know and they don’t say anything,” Megan says.

“But back then, I’m not sure they knew; we were too young. Nobody brings it up and I don’t tell anybody. For me I think it’s just too hard to explain.”

They joke that Terry has become a father figure to her and is even dragged on regular shopping trips to Dundrum.

“She has me broke,” he laughs at the impact of Megan’s shopping on his wallet.

“What happened with Robert I think in a strange way has made the bond between us and Megan and Katie even stronger,” he says.

“You fear that bond might be broken; you hear of that happening in families. But it’s the opposite with us.

“The two girls have their own bedrooms in our house and they stay with us when they want and come on holidays with us.”

For Megan, now on the cusp of adulthood, the next years will likely see her finally process what has happened to her father; as her grandparents have in recent years.

She says she misses him dreadfully. Her deep upset is clear when she ponders the missed opportunities with him that should have been part of her growing up.

“I remember things like going horse-riding with him. What happened makes [life] harder. I often think to myself, ‘What if he was here now?’”