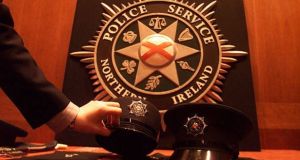 The PSNI sought 154 European Arrest Warrants between January 2007 and May 2017. Of these, 71 were granted, leading to the extradition of 47 suspects back to Northern Ireland. File photograph: Getty Images

Extradition processes in Northern Ireland “could become toxic” if the European Arrest Warrant (EAW) is lost as a result of Brexit, a senior Stormont civil servant has warned.

In the past decade, hundreds of the European Union-permitted EAWs have been used to extradite suspects into and out of Northern Ireland. Most were sought by the Police Service of Northern Ireland for the return of suspects from the Republic, rather than requests by the Garda Síochána for the extradition of people.

Following the June 2016 vote for the UK to leave the EU, Sir Malcolm McKibbin, the then head of the Northern Ireland Civil Service, requested that the permanent secretary of each department compile reports “identifying, as best we can at this early stage, the implications of the EU referendum result”.

In response, the Northern DOJ, whose permanent secretary is Nick Perry, submitted a document which states: “The EAW has removed the political dimension from extradition. The extradition process could become toxic once again.”

A second DOJ briefing paper, prepared a year after the Brexit vote, in June 2017 states: “For practical law enforcement, the maintenance of the European Arrest Warrant system is essential”.

There is currently no replacement for EAWs after Brexit. Two main types of extradition process exist. The EAW, introduced in 2004 , allows a country to seek the return of a suspect from every other EU region with the issuing of a single request. The second relates to extradition requests to nations outside the EAW area. That requires individual bilateral agreements.

The PSNI sought 154 EAWs between January 2007 and May 2017. Of these, 71 were granted, leading to the extradition of 47 suspects back to Northern Ireland.

The warrants were sought in relation to offences such as Breach of Licence (13 cases), rape (10), murder (seven), human trafficking (two) and terrorism (two).

The overwhelming majority of the PSNI applications (113) were for extradition of suspects who were believed to be in the Republic of Ireland, back to Northern Ireland.

He subsequently told Detail Data that “the UK’s decision to leave the European Union, and with that the various agreements and protocols including European Arrest Warrants, are something that at a political level needs to be worked through”.