Senior gardaí ‘supported corruption to save themselves’ - McCabe

The Garda whistleblower made allegations that ‘couldn’t be more grave’, Charleton tribunal told 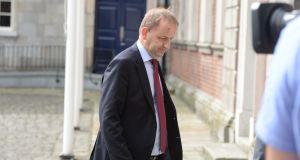 Sgt McCabe also claimed he brought several complaints to the superintendent “and he ignored every one of them”.

The document was shown to witness Chief Superintendent Fergus Healy who acted as liaison at the O’Higgins Commission for the then Commissioner Nóirín O’Sullivan. The commission sat in private during 2015 and examined complaints made by Sgt McCabe.

The allegations made by Sgt McCabe “couldn’t be more grave”, the witness at the tribunal told Shane Murphy SC, for the acting Garda Commissioner Dónall Ó Cualáin and senior officers. Chief Supt Healy said the barrister who acted for Ms O’Sullivan at the commission hearings, Colm Smyth SC, reached the view that he would have to test the evidence of Sgt McCabe.

The document drafted by Sgt McCabe was among the documents circulated prior to the first hearings of the commission in May 2015. Among the charges made was that he, Sgt McCabe, was “victimised, bullied and ridiculed for highlighting the issues”.

In another document, Sgt McCabe said that the complaints he made of failures in policing involving Supt Clancy were investigated by Assistant Commissioner Derek Byrne who “despite upholding the serious ones, came to a decision that the complaints against Supt Clancy were not substantiated was not substantiated in any way and he made no adverse findings against Clancy.

“Alarmingly [then Commissioner Martin Callinan] and Deputy Commissioner [NACIE]Rice agreed with Byrne. However it may be the case that Derek Byrne hid evidence, material and certain findings from his superiors because he was the Commissioner in charge of the region at the time of the wrongdoing and received a bonus.”

Sgt McCabe then made a complaint of corruption against then Mr Callinan because Supt Clancy had been placed on a promotions list. Mr Murphy at the tribunal said the sergeant had made a “pyramid” of complaints starting out with complaints about operational matters in Cavan/Monaghan and eventually at the top of the pyramid making an accusation of corruption against the then highest ranking officer in the State.

The tribunal has heard that all of the corruption allegations made against senior officers, including the former Commissioner, “fell away” or were eventually ruled as unfounded, arising from the commission enquiries.

The commission also ruled that some people had “wrongly and unfairly tried” to cast aspersions on Sgt McCabe’s motivation in making complaints. The commission accepted the sergeant’s “bona fides” or honesty of intention.

The tribunal is investigating whether inappropriate grounds were used at the commission by Ms O’Sullivan’s legal team in an effort to discredit Sgt McCabe. Ms O’Sullivan is at the tribunal and is to give evidence after Chief Supt Healy.